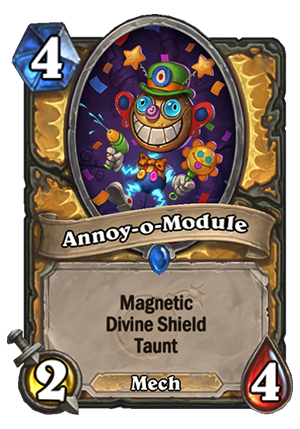 Annoy-o-Module is a 4 Mana Cost Rare Paladin Minion Mech card from the The Boomsday Project set!

Every ten seconds it asks if you want to update.
Tweet

It seems like this expansion is going to have quite a few Magnetic cards, for better or for worse. And this is another one. Annoy-o-Module is basically Annoy-o-Tron x2. Double Attack, double Health, double Cost, with an extra Magnetic.

2/4 with Divine Shield on Turn 4 is comparable to Saronite Chain Gang. Does it make a good card? Definitely not. Chain Gang is not a great 4-drop by any means. It’s played mostly in the decks that run Prince Keleseth (like Zoo), need it for the combo (like Shudderwock) or have some extra synergies (like Taunt Warrior). 2 bodies are slightly better, but this is more resistant to AoE, so I’d say they’re about even. Alternatively, it’s a Lone Champion without a condition, but with +1 mana. Lone Champion is good when you proc it, but it costs 3 mana, and that’s a big difference. Playing it on Turn 4 is not really great. So all in all, the minion is mediocre at best. It can be okay in some situations, but it won’t be amazing.

But, here’s when the Magnetic comes into action. +2/+4, Divine Shield and Taunt are really good for a 4 mana spell. The direct comparison would probably be Blessing of Kings. While 2 less attack sure hurts, I think that DS and Taunt make up for it quite nicely. Vs aggressive decks, it creates a big obstacle in their way, and against slower decks it makes it harder to remove with direct damage, both of which are good.

Now, the problem is that we need something good to curve into it. Right now, the only 3-drop Mechs in Standard you can consider playing are Harvest Golem and Nightmare Amalgam. If Amalgam sticks on T3, then buffing it on T4 creates a 5/8 minion with Taunt and Divine Shield, which is massive, it’s like having a 7-drop or 8-drop on T4. On coin, you can also play Upgradeable Framebot on T2 into Coin + this on T3, for a 3/9 minion with Taunt + DS. Unless Silenced, that’s enough of a wall vs Aggro. It would sometimes just win the game, since you will be dropping more Mechs behind it every turn, or buffing it, and it would take 2-3 turns for the Aggro deck to get through so early in the game.

One thing that’s important is that dropping it on T4, especially into small board / no board, can also be a serious consideration. It’s a sticky Mech, so it’s quite likely that it will survive, so you can buff it with Wargear (7/9 with DS and Taunt in the best case scenario) or Zilliax, although the Zilliax is a bit redundant if you have DS + Taunt on this already.

Of course, this card is just bad in any deck besides Mech Paladin. Without Magnetic synergies, this is comparable to Saronite Chain Gang, which is not really played in Paladin, or a 4 mana Lone Champion without requirement, which would also be pretty bad. And while it’s way too early to judge, I feel like Paladin might have what it takes to make a high tier Mech deck. And I’d say that this is a solid card in such a deck, especially since 4-drop slot in Paladin is pretty barren after Call to Arms nerf. In a deck full of Mechs, I would take it over Blessing of Kings any day, and we all know that BoK is a really solid card in Midrange Paladin decks.