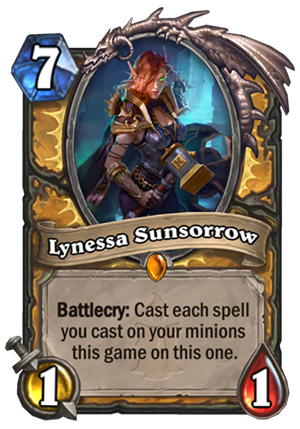 Lynessa Sunsorrow is a 7 Mana Cost Legendary Paladin Minion card from the Kobolds and Catacombs set!

Battlecry: Cast each spell you cast on your minions this game on this one.

A diet of pure magic is great for the complexion but wreaks havoc on one's mood.
Tweet

Peter Whalen discussed some of the lore behind Lynessa Sunsorrow:

Lynessa’s a former Blood Knight. After they stopped draining power from the Naaru, she left the order disgusted. She felt that the elves had grown weak and that drawing from the Sunwell couldn’t give her the power she truly sought. Now starving for magic, she’s come to the Catacombs, a repository of ancient energy. As she explores, she drains the magic from the air, feasting for the first time since she left Silvermoon. – Source