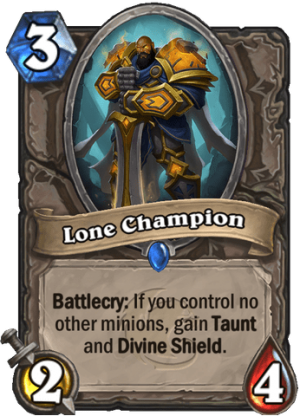 Battlecry: If you control no other minions, gain Taunt and Divine Shield.

He is a champion, with no friends. He'll keep on fighting, til the end!
Tweet

What I really love about this card is that is shows Blizzard’s ability to learn from the past. It’s easy to think that Tar Creeper was meant as a control card and it’s adoption by aggro decks was an unintended byproduct of its defensive powers that allow those decks to protect their threats, however the truth is that we can never know that this was not an intended use, on top of being a defensive option for slower decks. Whether it’s intentional or an honest “mistake” is up in the air, however if Team 5 was caught by surprise with the Creeper, they certainly took all precautions with Lone Champion. His “if you control no other minions” clause makes him abysmal in fast decks, because they are looking to get onto the board immediately and a vanilla 2/4 for 3 is not what aggro wants to be playing.

As far as slower decks go, will this see play over Tar Creeper? It’s hard to say. Technically, the Divine Shield counts as at least one point of health, so realistically it’s more like a 2/5 with Taunt for 3 mana, which is not all that bad. The big question here is the attack. On the defense, Creeper has 3 attack, which makes it stack up against the vast majority of early threats, killing aggro’s 1/3s and 3/3s, as well as trading completely with 2/3 minions that see play, along the lines of Arcanologist. Lone Champion‘s 2 attack means that it’s often going to get value traded into, without actually killing most things that will be running into it. On the other hand, it has more attack than Creeper when on the offense, so it’s a lot better at retaliating and trading on its own. It’s also a lot better later in the game, when it can soak up multiple hits from large minions. All in all, it looks like an interesting alternative to Tar Creeper and depending on what you need, you will be playing one or the other… or in some cases both. Highlander decks will love the option to play a second Creeper and in some cases the Divine Shield can be an upside, such as if Divine Shield Paladin becomes a deck, though it’s fairly likely to be a deck that plays too many minion to have Lone Champion enabled.