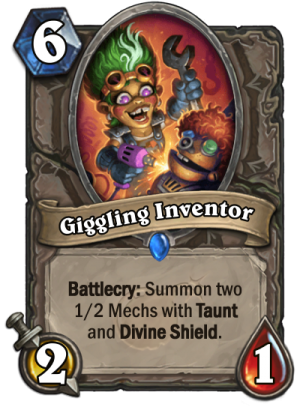 Giggling Inventor is a 6 Mana Cost Rare Neutral Minion card from the The Boomsday Project set!

"I shall build a mighty golden paladin! And he will GREET the WORLD!"
Tweet

Great, we’ve got a Neutral Call to Arms! Luckily the post-nerf version, because it would be absolutely broken at 4 mana. However, even at 5 it’s an interesting option in some builds and I actually quite like it. Remember how frustrating was when your opponent pulled 2x Righteous Protector from Call to Arms? You sometimes had to spend like two turns just clearing those Taunts with Divine Shield. This is very similar. Funnily enough, Odd Paladin would actually prefer this card over Call to Arms, since it only runs 1-drops. This card is better than the best case scenario Odd Paladin currently has, and it’s consistent (it won’t pull 1/2 Fire Flies).

It’s a single card that creates a decent board, and that board is an absolute nightmare to deal with. Two Taunts, both with Divine Shield, means that you either need LOTS of attacks (5 at the very least) to clear everything, or you need two AoE spells.

If you run a Mech deck, you get two Mechs on the board, which is good, since you can Magnetize onto them next turn. Buffs will also work pretty well if at least one of those keeps his Divine Shield. But this is one of those cards that might see play even outside of the Mech decks. Decks that want to go wide, Token decks that can take advantage of big boards, would probably welcome this card. For example, Token Druid kind of deck (less combo-oriented, more aggressive version) with Savage Roar or maybe Token Shaman with Bloodlust.

Even if you play a slower deck, you might potentially use it as a defensive option. It’s a bit like Sludge Belcher but spread over more bodies. At the very least, if you count Divine Shields as 1 health, it will stop 6 damage. However, Divine Shields are often worth more than 1 health, if your opponent can’t ping them efficiently. Then, the 2 health bodies might also take more damage than necessary quite often. Realistically, I’d say that this card will often block 8-9 damage, which is great against Aggro.

I feel like this card has so many uses that it will certainly find home in at least one deck, probably even a few of them. I might be overvaluing it a bit, but it seems like one of the best cards from the set so far. I would be astonished if it didn’t see any play at all. 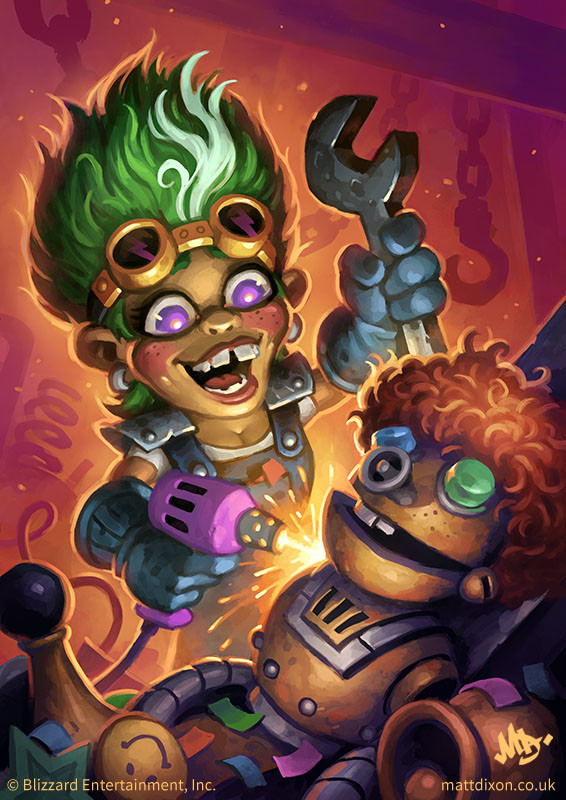