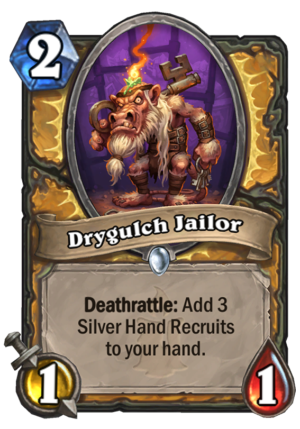 Drygulch Jailor is a 2 Mana Cost Common Paladin Minion card from the Kobolds and Catacombs set!

On the surface this card looks really bad – not only because Kobolds are not surface dwellers and prefer dungeons, but also because it’s just so slow. We have to be realistic – this is one of Hearthstone’s worst cards that you can play. The body is extremely weak, it costs way too much and it’s effect is behind a Deathrattle! However, we have to also be fair to the card – there is a reason this effect is gated so heavily that you would barely consider playing it, if at all. First off, Silver Hand Recruits do things. They have many synergies, starting from the obvious Lightfused Stegodon and Quartermaster (Wild), to things that care about 1/1s, such as Steward of Darkshire and Hobgoblin (Wild). While we are not currently seeing competitive Paladin decks in Standard that are not Murloc Paladin, we have to recognize that “Dude Paladin” is considered one of the best Wild decks at the moment. It has managed to reach a critical mass of synergistic cards that work off one another and while the power level of Drygulch Jailor is not up there with the Ultimate Infestations of Hearthstone, it adds to that Silver Hand Recruit-matters theme in its own way.

Another thing that it does is work well with is the handbuff mechanic from Mean Streets of Gadgetzan. It’s doubtful whether 1 mana 1/1s are exactly what you want to be buffing, given that after investing in playing handbuffs they become 1 mana 2/2s or 3/3s approaching the mid- to late-game… yay. Still, it’s something that can happen and just about any way you can extract value from the Jailor makes it somewhat scary because at the end of the day, it does generate a lot of extra cards for you to play. Keep in mind that, even if they didn’t do anything, those recruits are three more cards in your hand that you can now suddenly do things with – activating from “whenever a minion is summoned” to “when you play a card” effects and abilities, having those extra cheap resources could be very useful. Imagine a Highlander Priest using Potion of Madness on Drygulch Jailor – well, they have taken one of Hearthstone’s weakest cards and are now going to kill you with it. If any similar effect becomes available to Paladin, this could turn out to be a playable constructed card, especially if an Auctionmaster Beardo-like effect comes along, but one that cares about minions – suddenly you realize that three 1-cost dudes is exactly the amount necessary to summon all four Horsemen of the Apocalypse.

Despite all that, it’s unlikely for the Drygulch Jailor to see the light of day. It simply feels like a card that was made because they couldn’t miss the opportunity to make Silver Hand Recruits for the Recruit set and all of that sweet potential is locked behind some heavily locked doors. This minion does not trade with anything in its mana cost range and thus does not impact the board in any way, which is a very important quality for a 2-cost minion to have. 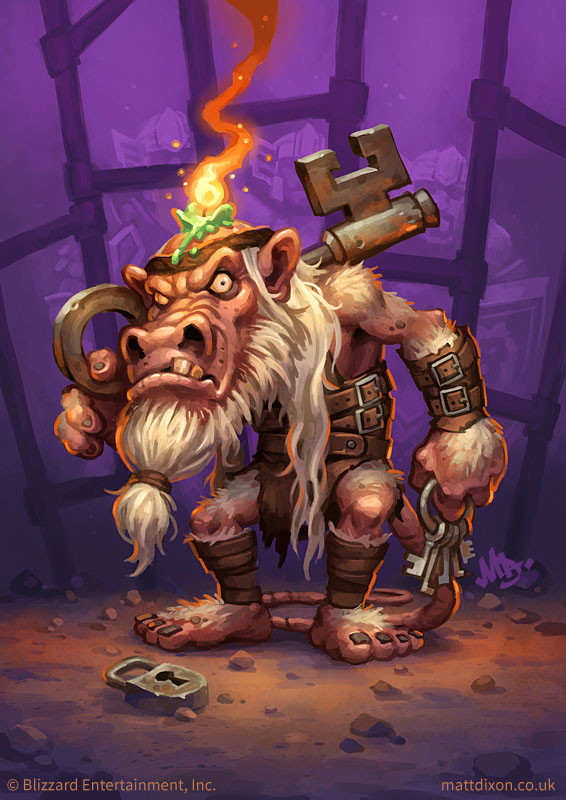