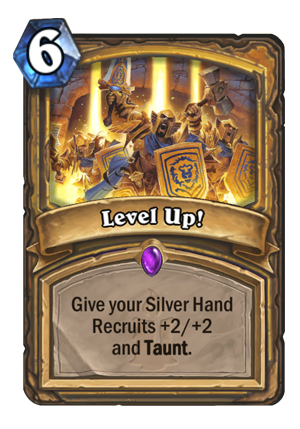 Level Up! is a 6 Mana Cost Epic Paladin Spell card from the Kobolds and Catacombs set!

Give your Silver Hand Recruits +2/+2 and Taunt.

Another one in a classic line of Paladin cards that do things with Silver Hand Recruits (get it, because Recruit is the mechanic of this expansion?), Level Up! has big shoes to fill. Quartermaster immediately jumps to mind as a direct comparison and although he is no longer in Standard, he has actually been carrying Token Paladin to the top spots of the Wild ranked metagame. This card does exactly the same, however it loses the 2/5 body, which is not insignificant, and replaces it with Taunt. This can be powerful in its own way, allowing your Recruits to protect a more valuable piece, however we have to keep in mind that usually, though not always, having the extra body is better.

Still, we have to be aware of the “critical mass” component – as yet another card that buffs recruits and as more ways to generate them are added into the game, eventually we have to wonder whether or not we want to have these cards in the deck simply because the more redundancy there is, the more consistently a game plan can be executed. Even if a certain approach is not inherently the strongest in the game, doing it often and reliably can be a successful winning strategy. By gaining not only additional board flooding options but also new ways to turn those tokens into threats, the Recruit deck will eventually reach critical mass where it can simply keep re-flooding the board again and again, exhausting the opponent’s ability to answer threats. It could, of course, be entirely possible that Level Up! doesn’t find its way into that deck because it’s simply not powerful enough, but time will tell.