From the release of Mean Streets of Gadgetzan, Handbuff Paladin has been on the fringe of the meta. The deck came close to competitive play thanks to synergy with the Elemental tribe in Journey to Un’Goro. Deeper into the Year of the Mammoth, Handbuff Paladin gained some useful new minions that improve the deck’s consistency and competitive potential. 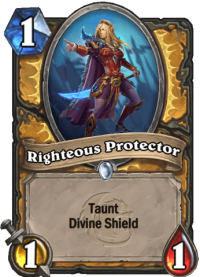 In particular, Saronite Chain Gang and Righteous Protector both provide quality targets for handbuffs. The Taunt each of these minions provide helps stave off aggression and protect Grimestreet Enforcer for multiple rounds of buffs. Cobalt Scalebane provides a beefy body that continues improving the stats of minions in play. More so, Bonemare provides massive swing turns with its immediate effect on the board.

In Kobolds and Catacombs, Handbuff Paladin shored up two of its biggest weaknesses. Drygulch Jailor makes it possible to quickly refill an empty hand with minions to receive buffs. Meanwhile, Lone Champion can flip the board in situations where you get behind in the early turns.

This budget version of Handbuff Paladin still has more than enough powerful tools to be a viable option on the standard Ladder. As your collection grows, adding some of the cards from the recommended replacements will strengthen the deck even further.

Handbuff Paladin is a deck that revolves around a fairly slow build on board into huge power swings by dumping a pile of stats into play. Typically, in the early turns your want to get the buffs rolling. This makes both Smuggler's Run and Grimestreet Outfitter dramatically more valuable in the early game when your hand is likely full of minions.

In later turns, protecting a Grimestreet Enforcer on board for multiple rounds of buffs can be game-wining. This can, however, be a value trap. Maintaining board presence is still priority number one for this deck.

Handbuff Paladin relies heavily on the timing of thebuffs, so maximizing their impact is crucial. Fortunately, several of the minions in this deck replace themselves in hand and, compared to past iterations of the archetype, it’s not terribly difficult to get buff value.