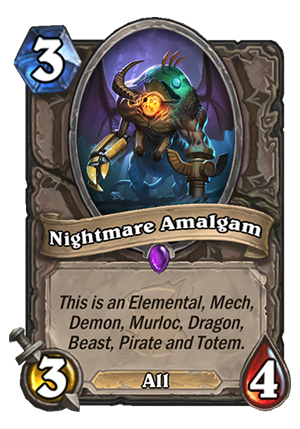 Nightmare Amalgam is a 3 Mana Cost Epic Neutral Minion card from the The Witchwood set!

This is an Elemental, Mech, Demon, Murloc, Dragon, Beast, Pirate and Totem.

This card is super cool! I actually never thought about one card with every single tribe. But here it is. And it’s really interesting, as there are tons of opportunities to play it. I mean, you can play it in Pirate deck, in Dragon deck, in Murloc deck etc.

The 3/4 stats for 3 are solid, it’s pretty much as good as you can get without having any downside. But 3/4 by itself is not enough – vanilla 3 mana 3/4 wouldn’t see play. It’s the synergies that make this card.

Yes, this card is super flexible… but the thing is, you rarely will use more than one tribe at once. Would you actually put a 3/4 vanilla Murloc into your Murloc Paladin deck? Or 3/4 Dragon into a Dragon Priest? It’s really hard to say, but that’s the most likely scenario for this card.

Come to think about it, the card would probably be strongest in multi-tribe deck. Sadly, lots of cards that support this kind of archetype are rotating out. For example, Zoobot or The Curator. But it might still be possible to make some sort of e.g. Murloc Pirate deck.

And I actually think that those multi-tribe decks will be where this card finds home, IF it finds home. It might be used as a sort of “filler” card if you need more synergies, but the thing is, most of the tribes simply have better cards.

Before I rate it, I need to talk about one important thing, another reason why putting this into a single tribe deck might not be the best idea. From your perspective, it will synergize only with the tribe you run. But from the opponent’s perspective, EVERY hate card will work on it. Cards like Hungry Crab and Golakka Crawler used to be popular tech cards, there is also a Dragonslayer (which is rare, but I’ve seen some decks teching it). Heck, it even dies to Sacrificial Pact – sure, Warlocks don’t really play it, but the point is that it will die to hate cards WAY more often than other cards. So you put yourself at a significant risk for not that big of a reward.

All in all, it might see SOME play in single tribe decks if you really need to fill your curve with a 3-drop, but the real place for this card to shine are multi-tribe decks. It doesn’t seem like this will be a thing, but they MIGHT print more support for such a thing. We’ll see. Right now, even though I find this card incredibly cool, I think it’s just average.