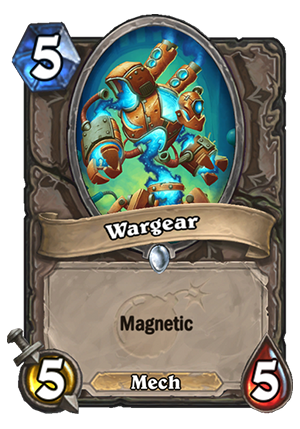 Wargear is a 5 Mana Cost Common Neutral Minion Mech card from the The Boomsday Project set!

I like the entire Magnetic mechanic. Just like with any other Magnetic card, you can look at this one in two ways. It’s a 5 mana 5/5 Mech minion, or a 5 mana spell that gives your Mech +5/+5. Either of those would be underwhelming by itself. However, let’s not forget how strong flexibility is. “Choose One” cards usually have two sub-optimal options, and yet they have seen a solid share of play, simply because they can do two things.

Wargear definitely won’t see any play outside of Mech decks. If you can’t utilize its Magnetic mechanic, then it’s just a vanilla 5/5 for 5, even worse than Pit Fighter, which obviously has seen zero Constructed play. However, if you play a dedicated Mech deck, most of your minions are Mechs and you can utilize the Magnetic part, then that’s another story.

In Hearthstone, buff cards have their obvious upsides and downsides. The upside is that if you buff a minion that can attack immediately, the extra stats gain a sort of “charge” – you can utilize them immediately, to trade up or to deal more damage. However, one of the biggest downsides is that they often end up being clunky if you can’t stick a minion. Sure, you can play a small body and buff it immediately, but then you get 2 for 1’d if it gets removed, and the minions is susceptible to Silence. And that’s where a card like that comes into action. If you have a minion, which can attack immediately, you can use it as a +5/+5 buff. But if you don’t – nothing prevents you from dropping it as a 5/5 minion. Sure, it’s not great, but it’s better than being a dead card in hand.

This card’s playability completely depends on how strong the Mech decks will be. If a Midrange/Tempo Mech builds pop out, there is a solid chance that this will be played. Of course, unless other, better options pop out by the time expansion is released. The card also looks juicy in any Mech deck that wants to run Spiteful Summoner. Minions that can “imitate” spells are way better if you can’t play the regular spells. I feel like even after the nerf, Spiteful is not completely out of the game yet and we might see it making a comeback.