In the recent big balance patch, 13 cards were nerfed, four of them Warrior cards. This has caused a major upheaval of the meta, even bigger than the release of the mini-set.

Overall, this is the fourth different meta during Voyage to the Sunken City:

This barrage of balance changes has been unprecedented in the history of Hearthstone. At times, changes have come so fast that the previous meta has not been even close to getting solved. We are treading on a new ground again and this iteration of the Sunken City meta is far from settled. However, we can already see multiple upcoming trends. 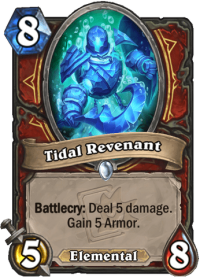 Control Warrior’s fall has been steep. With four cards nerfed, the deck has gone from a 56% win rate to a 46% win rate. Tidal Revenant has become a mere mortal. Nellie, the Great Thresher is still playable, but does not end games on the spot anymore. From the Depths has lost much of its power. Shield Shatter is still a fine card, but not nearly as dominant as it was.

I would not dismiss Warrior entirely yet, but it is time to go back to the drawing board to figure out what kind of Warrior can succeed in this brave new world.

If you need some ideas on how to get started, here’s what I played with yesterday with some decent success in early testing:

It just might be the time to bust out Stonemaul Anchorman, Kresh, Lord of Turtling, and Overlord Saurfang for another round of Frenzy goodness.

The New Era of Control Is Here

Control Paladin, for example, has been a perfectly fine deck throughout Voyage to the Sunken City, but it has been inferior to Control Warrior. It has been slightly worse in just about every matchup, and it has lost the direct confrontation. No longer!

Control Paladin is currently perhaps the best deck in the entire game. Sure, there were some slight nerfs to Lightforged Cariel and Mr. Smite, but neither of those affects the main game plan of the deck.

People have wanted to play with Myrmidons from the mini-set, but they probably will not make the cut. Lightray is the true contribution of the mini-set to Control Paladin, and the deck looks incredibly well-positioned to handle any threats in the meta.

But that is not all! With the shadow of Control Warrior lifted, other control decks are also crawling up to the surface.

Most notably, Big Spell Mage is one of the few counters to Control Paladin. The archetype has been fine-tuned to make use of the most broken synergies possible for overwhelming advantage. With only huge spells allowed in the deck, Balinda Stonehearth becomes a monster, and Barbaric Sorceress together with Mailbox Dancer can make your Drakefire Amulet or Rune of the Archmage cost zero. Power overwhelming.

But that is not all! There is also another.

Is it a control deck, or is it a midrange deck? Either way, it is slow. And it comes with Glugg the Gulper! Furthermore, this Shaman deck makes use of Clownfish in a non-aggressive way, enabling mid-game tempo plays that combine card draw and board development.

The early days of the new balance patch have been very different from any previous Sunken City experience, with multiple slow decks appearing at the top of the charts. The dominance of Warrior had prevented any other slow decks from succeeding, but now they have found some more room to breathe.

Murloc Shaman holds on to the title of the premium aggro deck in the format. Murloc Warlock is also playable, but ever since the mini-set, Shaman has outshined Warlock when it comes to playing fishy games. Murloc Shaman can overpower Big Spell Mage before they stabilize, but Control Paladins and Control Shamans are better at early defense and extremely difficult to crack.

Naga Priest Is Always Rising, but Never Reaches the Top

Poor Sisyphus, I mean Naga Priest. I have thought Naga Priest would become the best deck in the game multiple times. These nerfs, again, looked like they were set to make Naga Priest succeed. But nope. Naga Priest never fails to disappoint.

Either way, Naga Priest is the best Priest deck in the game. Quest Priest is far behind and Boar Priest, well, Boar Priest is a precision tool and there are not many uses for it right now.

Demon Hunter was hit with two nerfs, one to Caria Felsoul and the other to Battleworn Vanguard. Vanguard is too important to cut, but Caria has been let go from most of the lists now, and the decks are repositioning themselves more clearly as Fel Demon Hunter decks with Jace Darkweaver as the main win condition.

We can also see the return of Bone Glaive to soften up the opponent for the inevitable Jace turn. No matter what happens, Demon Hunter’s current card pool has proven to be tremendously flexible and able to adjust to many changes. In fact, Fel Demon Hunter is currently the second-best deck in the game after Control Paladin.

I’m on a Pirate Boat

While connoisseurs of combo decks remain hopeful that Mine Rogue can become mainstream, that is but a daydream. The real Rogue action is what it has always been: tempo. Pirate Rogue, Boat Rogue, whatever you choose to call it, an aggressive Rogue deck with Wildpaw Gnolls remains the best deck of the class even after the Gnoll nerf. It is also a highly competitive deck overall, and one of the best options you have for a smooth ladder climb.

Not much is new here. Some nerfs that did not result in any cards getting cut. Peasant is a lovely card in this one. That’s about it. 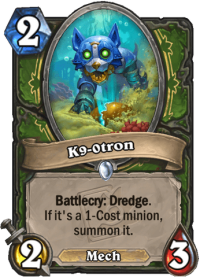 Perhaps the most interesting class in the first few days of the new patch has been Hunter, and Beast Hunter in particular. There are several competing ways to build Beast Hunter, and all of them look good. But which one is the best?

There is the traditional Beast Hunter style with a Secrets-based early game and Vanndar Stormpike. Nothing new here, but it remains strong.

There is also a more aggressive opener with Click-Clocker, K9-0tron, Murkwater Scribe, and Naga's Pride as the early game. A little less top end, a little more proactive at the start, even reaching Face Hunter levels of aggression. Less consistent with the aggression than the real thing, of course. Note that K9-0tron rarely summons a minion in this variant, but it will increase the consistency of your draws anyway.

Then there are a couple of variants that use Ambassador Faelin. Because many Colossals are Beasts, Faelin and Harpoon Gun can deliver some hilarious outcomes. This style of Beast Hunter can be built in a more traditional Sidisi style, or in a newer Naga style with Murkwater Scribe and Naga's Pride.

All variants are clearly above a 50% win rate, and we need a lot more Hearthstone to be played before we can announce a winner. Personally, I like the look of this Naga Faelin style a lot, it looks like a lot of fun. But time will tell which variant prevails in performance.

Any Druids in the House?

Druid has not been doing well recently. Sure, Ramp Druid can still highroll a game here and another there, but it does not have the steady performance numbers needed to succeed.

Right now, the best hope for Druid is Beast Druid.

It’s not much of a hope, really. Herald of Nature is a great card looking for a great deck, but Beast druid has way too many weaknesses to be that deck. The main redeeming quality of the archetype is its good matchup against Control Paladin, and as Control Paladin is really good right now, Beast Druid may have its uses in sniping that deck.

Overall, this patch has been a major game-changer. The Warrior nerfs are at the core of the patch. They opened up space for multiple other decks, including multiple control decks. The other nerfs in the patch are mainly there to keep other existing contenders from becoming too strong and simply taking over Warrior’s place at the top of the food chain. So far, it looks like they have mostly succeeded, apart from Paladin still casually rolling on as a tier 1 deck no matter the season.

During Voyage to the Sunken City, the meta has changed so often that it can be hard to keep up with it. So far, this current meta is one of the more diverse metas we have had in this expansion. There is a notable absence of combo decks, which have been a major balancing problem for Hearthstone for years, as they are usually either too good or too weak. Other than that, many archetypes are present and can succeed. Obviously, these are still the early days, and the meta may stabilize in a less diverse position. Anyway, as far as Sunken City goes, this is one of the more interesting times to play Standard Hearthstone!