Unless you’ve been paying careful attention, you might as well have missed that we have a fresh mini-set in Hearthstone. That’s right, the Maw and Disorder mini-set arrived just two weeks ago with 35 brand-new cards to shake the meta!

So far, this has been the least impactful mini-set of all time. Most of the meta decks use no cards from the mini-set. The top deck of the day, Beast Hunter, uses two new Legendary cards, Sylvanas, the Accused and Defense Attorney Nathanos, but it does not feel new. Beast Hunter has not changed its game plan in the slightest. In fact, some versions of Beast Hunter do not even run the new Legendary cards.

In this article, I will take a look at Maw and Disorder. What has it achieved? Where has it fallen short? What can it still achieve? 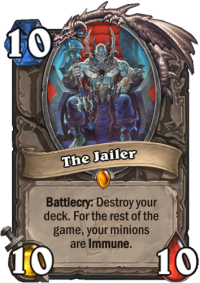 Thanks to the domination of Beast Hunter, Sylvanas, the Accused and Defense Attorney Nathanos are the most popular mini-set cards. As a Neutral card, Sylvanas sees play across a wide range of classes, in addition to fitting well into Beast Hunter.

The third-most popular card from the mini-set has been The Jailer, but the results it has brought do not line up with its popularity. It has some potential as a win condition, especially in Druid. Therefore, there should be decks that want to use it in the future, but I expect its use to fall as decks become more refined.

The final mini-set Legendary card is also being experimented with. Prosecutor Mel'tranix has seen play in all Demon Hunter archetypes, but I am uncertain whether there will be room for it in any of them after refinement.

Legendary-wise, the set is not too bad. At least three out of four Legendary cards should have some uses in playable decks. Sylvanas, the Accused and Defense Attorney Nathanos are not the defining tools of their decks, but they make their decks stronger. The Jailer has potential as a main win condition, even though it is on the slow side. 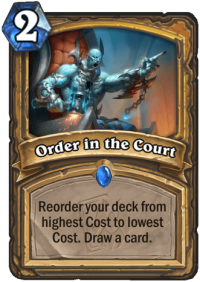 In Standard format, the only non-Legendary mini-set cards that have established themselves are Order in the Court, Attorney-at-Maw, and Dew Process. All of them are minor additions to their classes, but playable ones.

That is a bleak picture of the strength of Maw and Disorder. However, it is not the whole story.

The archetype-shaping cards from the mini-set have not been able to define new Standard archetypes, but neither have they irrevocably failed yet. The Secret Mage synergy cards, Objection! and Contract Conjurer, have already proven themselves in Wild. They may not have enough support in Standard, but the cards themselves are strong. Aggro Demon Hunter’s new card draw tool Sightless Magistrate is also still looking strong, it just lacks further support. Weapons Expert and Scribbling Stenographer also show moments of greatness, and may well become key cards in future expansions.

Decks That Use New Maw and Disorder Cards

The most common deck you meet on the ladder right now is Beast Hunter:

It is not necessarily a bad tyrant to have. Beast Hunter is quite fair overall. It has some Harpoon Gun highrolls, but apart from those, it is just a pile of strong cards. Sylvanas, the Accused and Defense Attorney Nathanos are a natural fit with a deck full of small Legendary win conditions. What is more concerning is how none of the other decks are able to put up a good fight against an archetype that does not do anything special.

Druid also makes good use of the new mini-set cards. Ramp Druid has even found a potential new win condition in The Jailer:

You can find The Jailer, Sylvanas, the Accused, and Attorney-at-Maw in this Ramp Druid deck. Note that this is a second-generation deck after the mini-set launch and has already cut Dew Process. Whether Dew Process will be viable in the long term is yet to be established.

One of the most interesting decks helped by the mini-set is Control Paladin:

This same list has seen play on the ladder as well, and it actually looks promising with an above-50% win rate. Order in the Court and Sylvanas, the Accused fit in nicely to the list. The first-generation Paladin decks attempted to use The Jailer as their win condition, but that approach did not bring results. Going back to Control Paladin basics with the help of some new cards seems to be more fruitful.

Aggro Demon Hunter has not been able to reach the level it was expected to. The deck is hovering at around 50% win rate, unable to break through to real success:

Sightless Magistrate is an improvement and should have been exactly what the deck needed, but it just does not have enough power.

Secret Mage has also not quite found its footing in Standard. There are variants with the full Hero Power package, variants with none of that, and variants with Magister Dawngrasp alone, like this one:

Objection! and Contract Conjurer are strong additions to the archetype, but it does not look likely that the current overall card pool can support a strong Secret Mage deck. This is the best that has been found so far.

Miracle Rogue has added Scribbling Stenographers to the list, and keeps rolling:

Rogue is not great, but it is not terrible either. Even with the addition of the Stenographers, it is quite mediocre.

Can Maw and Disorder Achieve More?

Maw and Disorder provided some bits and pieces to existing decks, and that seems to be its main contribution. Decks like Beast Hunter, Ramp Druid, and Control Paladin are flexible in incorporating strong individual cards into their game plan. 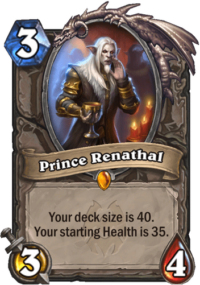 Maw and Disorder also attempted to help some struggling archetypes, with weaker results. Aggro Demon Hunter, Secret Mage, Silver Hand Paladin, and Enrage Warrior are all stronger now than they were before the mini-set, but they are still not strong enough.

We are in a meta of relatively low power level and high level of disruption. Strong win conditions are few and far between, and even if you draw yours, it might be stolen from you. It is hard to maintain your synergies, and it is also hard to kill 40-Health opponents with low synergy decks. We are smacking each other with wet noodles. In a world of Prince Renathal, Sire Denathrius, and Theotar, the Mad Duke, it was perhaps unrealistic to expect major changes from the mini-set. Right now, it is a numbers game. The best decks cram in as many win conditions as they can. It is the quantity of your win conditions that counts. That is a difficult reality to change with a mini-set.