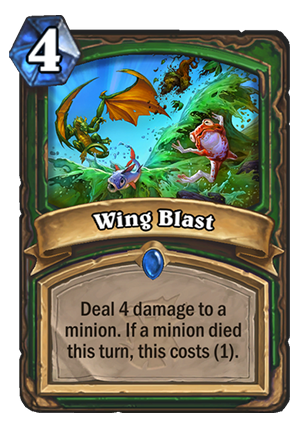 Wing Blast is a 4 Mana Cost Rare Hunter Spell card from the The Witchwood set!

Deal 4 damage to a minion. If a minion died this turn, this costs (1).

Remember an old, BRM card called Dragon's Breath? It’s like a much, much better version of it, except the fact that you can’t use it on your opponent’s face. Still, this is a very powerful card.

At the base, 4 mana for 4 damage to a minion is bad. It’s a more expensive Shadow Bolt, which is a mediocre card already. However, once you meet this card’s condition, it suddenly becomes quite powerful. 1 mana for 4 minion damage is way different – it’s a very high tempo and super powerful removal. Remember how good Arcane Blast with Spell Damage was? Or how high tempo an upgraded version of Lesser Jasper Spellstone can be? Exactly.

Right now I see two decks that would want this card. First one is Midrange Hunter. Even though it’s pretty aggressive for a Midrange deck, it still wants to fight for the board control. You can e.g. trade one minion and clear a second one with this card for almost free. Or maybe trade your small minion + this into a bigger Taunt. When playing the deck, you’re often forced to use Kill Command to clear minions, while you would prefer to keep it for the burn damage. Wing Blast is much better for killing minions – no Beast requirement, 1 vs 3 mana, the only downside is the 4 instead of 5 damage, which might make a difference quite often, but it’s still better for the board control.

And the second deck I would see this being played in is obviously Spell Hunter. While the deck is losing Barnes + Y'Shaarj, Rage Unbound combo, it doesn’t mean that it will be completely dead. Every strong spell is a big buff to Spell Hunter, and this is exactly that. Activating the condition shouldn’t be hard. While you don’t run lots of minions, between the cards that summon minions (e.g. Unleash the Hounds, Lesser Emerald Spellstone) and the fact that you remove stuff often with weapons/other spells, this will be a high tempo removal for the deck.

Why no Control Hunter you might ask? I mean, if Control Hunter was a thing, then this card would probably be played in it. But, again, unless they absolutely go nuts on that theme and push it hard, it’s not going to become viable.

While this card is not flashy or anything, it just feels very powerful. I would be very, and I mean VERY surprised if this didn’t see any play.