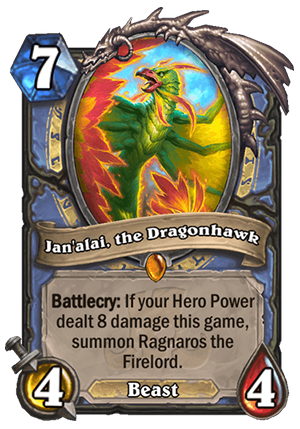 Battlecry: If your Hero Power dealt 8 damage this game, summon Ragnaros the Firelord.

You mess with the Bird, you get the Firelord.
Tweet

Cards Relating to Jan'alai, the Dragonhawk

This card seems really, and I mean really powerful. Ragnaros the Firelord was so omnipresent that Blizzard decided to Hall of Fame it. At 8 mana, it was played in multiple Midrange and Control decks all over the ladder (similarly to how The Lich King is played right now). What if you could play it for 7 mana? With a 4/4 body on top of it? Well, that’s like having a Spiteful Summoner high-roll without having to build a Spiteful Summoner deck at all!

Yes, the card has its condition. Obviously. It would be beyond broken if it didn’t. And here’s the thing. In regular Mage decks, such as Big Spell Mage, this kind of condition basically restricts this card from seeing play. Then, if you start putting Hero Power synergies and boosters to your deck (Spirit of the Dragonhawk, Daring Fire-Eater), you make this card more consistent, but your deck more and more clunky overall. Will a pay-off of having such a strong 7 mana play be enough for players to do it? Hard to say, I’m personally not sure.

But there is one deck that can run Jan’alai without really sacrificing anything. By just playing the way it’s playing anyway. That deck is Odd Mage. It was first pushed slightly in The Witchwood with Black Cat – a very strong card if you happen to not play any Even-costed card. The problem was that some of the best Mage cards are Even, so running an Odd deck decreases your average card quality by A LOT. That, plus there’s not that much synergy going on with your Hero Power. Boomsday Project didn’t change that much, it added Stargazer Luna, which is a strong 3 mana play, but nothing to really boost the deck’s viability. But it seems that Rastakhan’s Rumble is pushing this theme much harder. Pyromaniac, for example, is a really solid Odd Mage card. 2 damage Hero Power makes it much easier to trigger its effect, and 3/4 stats for 3 mana are pretty okay. Then, there’s something like Daring Fire-Eater, which makes the combo even easier, but more importantly, it makes Jan’alai even easier to get. Yes, because Jan’alai is the ultimate Odd Mage synergy card. It costs 7, so it fits right in. The requirement is to deal 8 damage with your Hero Power – which basically means using your Hero Power 4 times. In a deck built around the Hero Power. If you play just a single Daring Flame-Eater, it reduces the number of necessary Hero Powers to 3 – which should basically mean that playing Jan’alai on curve is something you might be able to do quite consistently. And a 4/4 + Ragnaros on Turn 7 is definitely a massive win condition.

I’m not sure if those are all of the cards that Odd Mage might want to play this expansion. If it is, then the deck might still might be one or two steps from being viable. To be honest, some Odd-costed single target removal would go a long way, since the deck can’t play Frostbolt, Fireball or Polymorph. But in general, I see the deck’s potential and I will definitely experiment with it at the start of next expansion.

Jan’alai is obviously a very powerful card. I won’t give it 10/10, because it might still be a bit difficult to trigger it, but any deck that will be able to deal 8 damage with Hero Power by the late game will DEFINITELY play it.