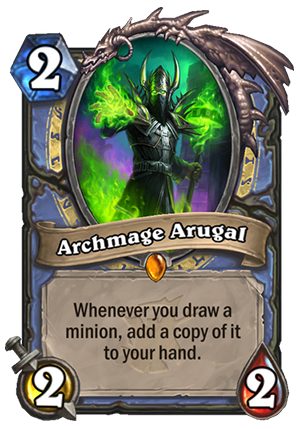 Archmage Arugal is a 2 Mana Cost Legendary Mage Minion card from the The Witchwood set!

Whenever you draw a minion, add a copy of it to your hand.

Well, now the Book of Specters makes a lot more sense… If you play this + Book of Specters, which isn’t a difficult combo to pull off, as it only costs four mana, you get a 2/2 and SIX cards in your hand if you hit three minions. That’s a massive, and I mean massive refill.

Elemental Mage based around minions can really be a thing right now. You can easily build that deck without lots of spells, and it’s heavily synergistic. You could make it a sort of Midrange deck that wants to play on the curve.

Obviously, Argual also gets insane value if he sticks to the board, and while a 2/2 won’t stick that often, it is possible. Like, you often can’t kill that Knife Juggler your opponent has dropped and you have to leave it.

Overall, this card has lots of potential. It’s not broken BY ITSELF, but the Book of Specters kind of activates it.

Now the question is – is it worth to sacrifice all of that burn etc. and run a nearly full minion Mage deck? It’s a very hard question. Right now, my answer would probably be no. Elementals aren’t really bad, but the tribe doesn’t have broken early game cards like e.g. Mechs used to have with Mechwarper. It’s hard to snowball the game with them, and their synergy tends to be pretty… slow.

It will require lots and I mean lots of clever deck building, but it might be possible to get the right balance between minions and spells for this card (and Book of Specters) to still be worth it in a deck running spells. It’s really hard to say. It has lots of potential, but if the minion-heavy archetype fails, it probably won’t work.

P.S. I’ve heard some voices that it has insane synergy with Aluneth… Yeah, if you want to burn 5 cards every turn. Aluneth doesn’t fit into a minion heavy deck like that, unless all of the minions you play cost 1-3 mana. Drawing 4 cards per turn is A LOT and minions tend to be very clunky. Remember that even in Secret Mage it’s often hard to not burn cards after Aluneth, and you have ways to put Secrets into play for 0 mana, 0 mana Kabal Crystal Runners and Sorcerer's Apprentice to discount your spells. Even then you often just burn a card or two even if you try as hard as possible to not do that. 4+ mana minions are so clunky that you rarely can play them after Aluneth. And I can’t see building a 1-3 mana Aggro Mage deck right now, because Mage has no Aggro shell to play.

Card rating: 9/10 in a minion Mage deck, but it also has some potential (like 5/10) in other Mage decks as a value generator.