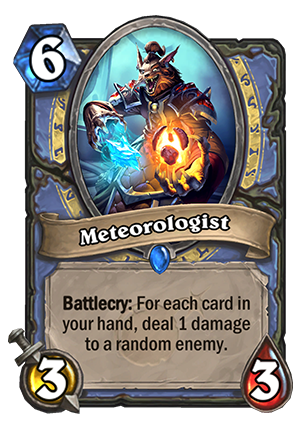 Meteorologist is a 6 Mana Cost Rare Mage Minion card from the The Boomsday Project set!

Battlecry: For each card in your hand, deal 1 damage to a random enemy.

Some say the world will end in fire. Some say in ice. Why not BOTH?
Tweet

This card has some potential, but only if you can keep your hand sizes really high. And I mean it. If your average hand size is 5, then this card is pretty bad. 6 mana for 3/3 that deals 4 random damage (4 not 5, because it starts doing damage after it leaves the hand already). With 9 cards in hand, this is Avenging Wrath with a 3/3 body. Seemingly really powerful, given that Avenging Wrath has seen play in a T1 deck, right? Well, not exactly. It has seen play for a few specific reasons that don’t translate well into another deck/class. Paladin plays it because the class has no reach (and Mage does), because of the Equality synergy (and Mage doesn’t have anything like that) and because it is a Genn Greymane deck, so it has limited choices.

A 3/3 with Avenging Wrath attached would be good, but not as broken as you might think. But that’s like the best case scenario. You would need to have a nearly full hand to do it. Big Spell Mage might fill that condition, but Big Spell Mage doesn’t want to deal a bunch of random, Avenging Wrath style damage. The deck doesn’t care about face damage, for example, and this can hit it. That’s why the only deck I can imagine this seeing play in is Elemental Mage – a deck with hand sizes so big that it commonly runs Mountain Giant. The effect also fits this kind of deck quite well, because the deck doesn’t run many spells (because otherwise Book of Specters would be pretty weak), so having a source of removal/burn damage can work nicely.

Tempo Mage with Aluneth is also a possibility, although the card would be terrible until you get Aluneth. By Turn 6, you usually have maybe 2-3 cards in your hand, so it would be just bad.

Bad-to-average in most of the Mage decks, but it can be very useful in a deck like Elemental Mage. Especially if your opponent didn’t develop and you shoot him for like 8-9 in the face, that can really hurt.