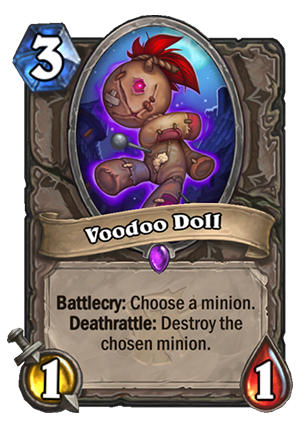 Voodoo Doll is a 3 Mana Cost Epic Neutral Minion card from the The Witchwood set!

One of the strongest cards from this expansion. I’m really surprised that this one is neutral, as it gives a sort of “hard removal” even for decks that didn’t have a good one before.

Well, let’s start by looking at its power level if you can’t combo it with something. This is a bit like a worse Corruption with a 1/1 minion attached.

It’s delayed and can be countered by transform effects (honestly, that’s not THAT bad – you force e.g. Mage to use Polymorph on your 3 mana card) and Silence (this one is worse). So it wouldn’t really see play like that. If you want to remove something, you usually want to remove it right away. If you don’t, your opponent gets another turn of the ongoing effect (like Ysera card) and another attack (either trades it into something or just deals more damage to you). But it can still sometimes be useful – some Warlock decks used to tech Corruption after all.

However, when rating this card, it’s important to look at the bigger picture. This card can be also cleared by the owner to kill the minion right away. The best example would be Mage – you could play this and ping it with your Hero Power on Turn 5. While you would most likely prefer to run Polymorph before this, it might make sense as an extra single target removal (alongside Poly) in Frost Lich Jaina deck – pinging it results in an extra Water Elemental after all. If Odd Mage somehow becomes a thing, it could also replace Polymorph in that deck.

Another good example is Warlock. There would be two main uses for it – as a single target removal with Mortal Coil (4 mana to destroy anything, quite good) or as a supplement to your AoE turns. It’s especially potent with Defile – not only it can clear a higher health target that would normally stay out of the Defile’s range, but it also has 1 health, so it can start a longer chain if you’re missing a 1 health minion on the board. Later it can also be used with Hellfire. Or with Dark Pact if you need single target removal and healing (it’s like a much better Siphon Soul, but you need to use two cards). Or possibly, after you turn into Bloodreaver Gul'dan, you can ping it with your Hero Power if you need to remove something big.

Warrior deck with lots of Whirlwind effects would also probably want to play this. Since you’re dropping 1 damage AoEs left and right, having an extra 3 mana removal is not too shaby.

However, all of the classes listed above have lots of removal options already. But how about let’s say Druid? A slower Druid deck was often held back by its lack of removal. When opponent dropped something big, you couldn’t really do much. This card can be combo’d with Wrath (1 damage + cycle), or even with Lesser Jasper Spellstone if you really need to kill something right away.

As for the Neutral activators, this could theoretically be combo’d with Elven Archer as a 2 cards, 4 mana neutral removal, which is cool, but since Archer doesn’t cycle and only leaves a 1/1 body behind, it’s not that great. Similar thing with Scorp-o-matic for 2 mana, which MIGHT be used in let’s say Paladin if you also run Aldor Peacekeeper or Humility, although that’s a really long shot.

Yet another application is running it in Spiteful Summoner decks. Since you have to drop most of the spell removals (as they would interfere with your Spiteful), this can substitute them quite nicely, especially if you have some way to proc it.

One more advantage over the regular spell removals is that it can bypass the “Can’t be targeted by spells or Hero Powers” effect, although we don’t really see it often in the current meta.

This card has lots of applications. In the end it might not see THAT much play, because most of the decks that would want to run it have other removal options too, but I really like it and I think that it’s very powerful.