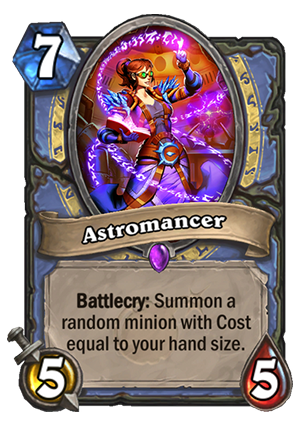 Astromancer is a 7 Mana Cost Epic Mage Minion card from the The Boomsday Project set!

Battlecry: Summon a random minion with a Cost equal to the number of cards in your hand.

While the effect is not as restrictive as Spiteful Summoner‘s (which warranted a nerf because of how powerful it was in some builds anyway), you also need a right deck to play it. The one you’re looking for with this card is most likely a Midrange style of deck with lots of cards in the hand at the same time (duh). Which means that the most obvious deck choice for this card is Elemental Mage. This minion-based build generates A LOT of cards. Full hand is not uncommon in the mid/late game at all. Right now it’s not a great build, but it can potentially get better in the future. In that kind of deck, it would be a 7 mana 5/5, summoning a random 7, 8 or 9-drop most of the time (summoning 10-drop is not really possible, since you will only have 9 left in your hand when you drop it).

It could potentially be viable in Big Spells Mage too – a deck that tends to have a high hand sizes in the mid/late game. However, it just seems unnecessary. It just doesn’t go alongside the deck’s game plan. Like, you already CAN put more big threats into the deck, but it’s not the best way to go – Frost Lich Jaina is enough to outvalue most of the opponents. Since you can’t really remove any of your already weak early game, nor the removal spells, you would probably have to get rid of something like The Lich King or Sindragosa to fit this one, which I don’t believe is correct.

So while the theoretical power level of this card is pretty high, the main problem might be finding the right deck to play it in. I mean, we already have a perfect one – Elemental Mage – but unless it gets more support, it won’t likely jump from Tier 4 up to Tier 1/2 just because of this one card. But I’m pretty sure that even if not now, the card will be played at some point, because it can be a good late game threat.