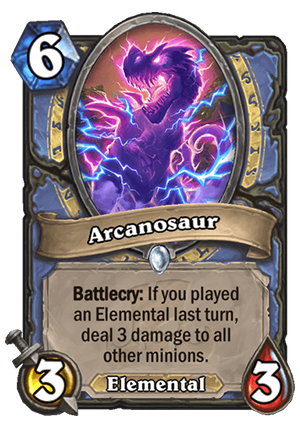 Battlecry: If you played an Elemental last turn, deal 3 damage to all other minions.

A balanced version of Duskbreaker. Because realistically that’s how much it should have costed in the first place (the current version is absolutely nuts if you have any doubts). And while I have to say that a 6 mana version of Duskbreaker would still be pretty playable, I have my doubts about this card.

The thing is, Dragon synergies work much better for this kind of effect than Elemental synergies. When you play Duskbreaker, you don’t need any set-up – you just need to have a Dragon in your hand right now. Your opponent floods the board, you drop it, you clear it. But in this case, you can’t do just that. There are turns during which you have not played an Elemental last turn – and if that turns happens when your opponent has flooded the board, this card is useless. You need to play something else, wait one more turn and then drop this, at which point it might be too late. And if that “something else” you’ve played is still on the board (which can be the case), you damage it too.

I mean, if you play a dedicated Elemental Mage deck, then it’s not a problem most of the time – you play Elemental nearly every time. But you can’t just put an “Elemental package” like you can with Duskbreaker & Dragons and still make it work. For example, it could be decent in Big Spell Mage, especially since it would heal for all the damage dealt after Frost Lich Jaina, but the deck doesn’t play the necessary density of Elementals to make that work.

So in the end, I think that this card might see play in all-in Elemental decks, where you drop one nearly every turn. Especially the builds which run Book of Specters and don’t really have access to AoEs – that’s a nice boost for those builds. One downside is that those builds are pretty proactive, so they will usually blow a part of their board too, but that’s the price you have to pay for surviving sometimes. In other decks? I don’t think it will make a cut. Not only because it’s much slower than Duskbreaker is, but also because Elemental synergies don’t work with that kind of effect unless you’re triggering them nearly every turn anyway.

Card rating: 7/10 in Elemental Mage, useless in other decks