The Witchwood expansion is releasing this week, and with that comes a lot of questions: What time is it launching? What about the Monster Hunt? How does this whole Standard rotation thing work? How does the Hall of Fame dust returns work? Well, we seek to answer these questions as well as give you all the information you need prior to the release of the new expansion.

What time of day is The Witchwood set to release/launch?

The release date for The Witchwood is April 12th, 2018. Here are the official release times as given by Blizzard:

When is the Monster Hunt set to release/launch?

While the Dungeon Run content of Kobolds and Catacombs came out side-by-side with the expansion it will be a bit different this time. Monster Hunter will be released TWO weeks after the release of the expansion (April 26th, 2018).

What am I Getting for Free?!

Remember that you will also get one guaranteed legendary in the first 10 packs you open for the expansion!

How does the Standard Rotation work?

Either once The Witchwood patch releases, or once the expansion itself hits the game, three sets will be rotated out of Standard. These sets are: Whispers of the Old Gods, One Night in Karazhan, and Mean Streets of Gadgetzan. Along with these sets, certain cards will be added to the Hall of Fame and will no longer be playable in the Standard format: Ice Block, Coldlight Oracle, and Molten Giant (nerf being reverted).

How do I maximize my Arcane Dust from the Hall of Fame?

If you didn’t know, when cards are moved to the Hall of Fame you receive arcane dust for the full crafting amount of a playable set (1x Legendary, 2x of everything else). This leads players to try to figure out how to maximize the amount of dust they’ll get once this happens. The quick answer is that if you own a full playset of all of the cards you don’t need to do anything. If you own none of the cards, you should craft them in gold if you can (otherwise craft them normally).

For a full look at this, check out our Hall of Fame Arcane Dust guide!

I refer to most of these tips for every expansion and they continue to be useful to this day!

In the past it’s been easy to absentmindedly purchase the wrong packs, so make sure you are paying attention when you hit the purchase button!

Streamers buy a TON of packs, and if you’re on a budget and want to get your fix then I’d advise watching them open packs. It’s not exactly the same, but it can help ease your lust for packs.

It’s tough to not craft a bunch of cool looking Legendaries the day they come out, but if you’re on a budget you should just hang back and wait for the meta to settle a bit. The famous example of tons of people crafting Troggzor the Earthinator comes to mind, where it seemed like a great card but ended up never really seeing any play. This also goes for disenchanting cards! Finja, the Flying Star was not a popular Legendary when Mean Streets of Gadgetzan released, but ended up seeing quite a bit of play.

This is your absolute last chance to pre-order the expansion! The pre-purchase is usually the best way to get packs if you plan on spending money on the game. Getting a free card back isn’t too bad either.

This is the best pre-purchase deal we’ve ever seen for Hearthstone, you get 70 packs instead of the usual 50 for $49.99 USD. 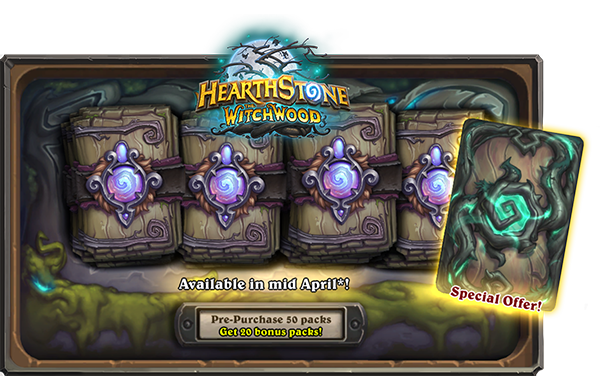 New Stuff Coming to The Witchwood

The first expansion of the Standard rotation is usually very influential on the meta, so be on the look out for things to look quite a bit different than you’ve been used to in the Year of the Mammoth.

Check out our The Witchwood card list to get up to speed on the new expansion!

If you love Dungeon Run in Kobolds and Catacombs you are probably going to enjoy Monster Hunt which seems very similar. This will not be released until two weeks after the expansion is launched.

If you missed out on Dungeon Run, Monster Hunt is a single-player game mode that allows you to build up a deck while defeating AI bosses on your way to a final showdown with a strong boss.

There’s two big deck build around cards in The Witchwood expansion: Baku the Mooneater & Genn Greymane! These cards require you to either have either only odd cards or even cards to gain a powerful effect. Which one will be stronger? That remains to be seen!

Echo cards can be cast multiple times in the same turn, just like Unstable Evolution.

Rush minions have Charge, but can only attack minions on the turn they’re summoned! This is very similar to Charged Devilsaur.

Deck to Try in The Witchwood

We’ll be posting a ton of decks on the site when the expansion hits, but be sure to check some of our theorycraft deck guides prior to the release to get some great ideas for decks.