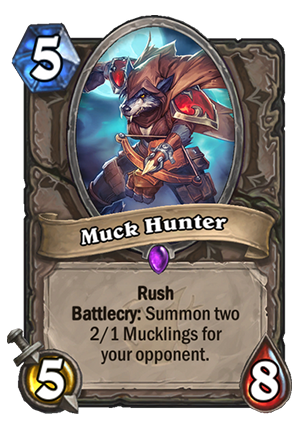 Muck Hunter is a 5 Mana Cost Epic Neutral Minion card from the The Witchwood set!

It looks like a card that can only fit into certain decks that can easily deal with the 2/1’s that it summons, but in such a deck this card can be really awesome. First let’s analyze it assuming you can’t kill the 2/1’s.

You play a 5/8 and summon two 2/1’s for your opponent, meaning that technically, if they trade back, you have a 5 mana 5/4 minion with Rush. That’s not the end of the world, but it wouldn’t be playable in Constructed. There is also a bigger downside against Aggro decks – your opponent probably won’t trade with those 2/1’s, but will go face instead. Building a bigger board for your opponent might not be the best idea. It can also be stopped by small Taunts, e.g. Righteous Protector on the board makes it completely unplayable by itself. By itself, the card is probably 2/10 or something similar.

However, you wouldn’t want to put it into any deck. The first thing I have in mind is Warrior – either Control or slower Midrange/Tempo deck. The ones running Whirlwind effects. The card is a bit similar to Cornered Sentry, but honestly, probably even better. If you can play a Whirlwind effect on the same turn you drop it, it becomes a 5/7 minion with Rush for 5 mana. That’s absolutely insane – not only you should be able to clear most of the early / mid game minions, but you also will have a solid body left-over. For example, the best case scenario would be playing Blood Razor on Turn 4, attacking once, then playing this on Turn 5 and attacking second time. That would be a terrific play against most of the aggressive decks. You can also combo it with Warpath in the late game, especially if you could use that AoE damage anyway.

Another deck that it MIGHT slot into, but less likely, is Control / Big Spell Mage. The deck is really light on minions and it could use some. On Turn 7, you can play it and ping one of the 2/1’s immediately, but it gets even better if you’re a Frost Lich Jaina already. Even assuming that you trade it into the second minion, you end up with a 5/6 and Water Elemental on the board – that’s really good.

One thing worth mentioning is that if you can avoid the Battlecry, this is very good. For example, if you can somehow Recruit it, or summon it from your hand, it gets extra value. 5/8 Rush card is very powerful if you don’t have to summon small stuff for your opponent. But it might be pretty difficult to get around the Battlecry.

So, all in all, I think that this card will be very bad in most of the decks, but it might find its home, especially in some sort of Tempo/Control Warrior with Whirlwind effects. Since you need to combo it with 1 damage AoE to really be good, I don’t think it’s going to be broken, but it should be solid in the right deck.