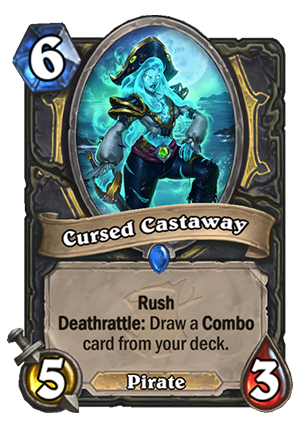 Cursed Castaway is a 6 Mana Cost Rare Rogue Minion Pirate card from the The Witchwood set!

Rush Deathrattle: Draw a Combo card from your deck.

She was an ordinary castaway... until she found that cursed volleyball.
Tweet

Cursed Castaway. I like combining Rush with Deathrattle, because those keywords synergize with each other quite nicely. A rush card will usually be used to attack a minion right away, often even dying on the spot. That’s a plus, because you play a card and get a card – you don’t lose card advantage. At the same time, Rogue doesn’t care THAT much about card advantage, and this card isn’t very high tempo. 6 mana to deal 5 to a minion is pretty meh in terms of how much you can do. I would understand if it was Charge, but I feel like this should cost one mana less, or at least have 6 attack instead.

A lot of people compare it to Starfire that can’t go face, and Starfire doesn’t see play. While it makes some sense, I don’t think that it’s necessarily a fair comparison. I think that this is better than Starfire. First of all, it’s a minion – it can survive if you run it into something with 0-2 attack, or you can even play it on an empty board if you have nothing else to do. It’s not great, but 5/3 on the board is often better than 5 face damage.

Then, drawing specific cards is usually better than just drawing, because you can build your deck around the effect. In case of Rogue, though, Combo cards are already some of the best cards in your deck. Eviscerate, SI:7 Agent, Elven Minstrel, Vilespine Slayer – those are all great cards.

Well, it’s a Deathrattle, so it could take advantage of Deathrattle synergies. Like, a 5/3 Rush would be an amazing Deathrattle to revive from N'Zoth, The Corruptor. However, not only N’Zoth rotates out, but Deathrattle Rogue decks were never good.

It’s not the worst card revealed so far, but I feel like it’s not good enough. Seems one mana too expensive – it would be amazing at 5 mana. Might be used if some really powerful combo card gets released, something that you really want to draw every game. Or maybe if that combo card is a part of some, well, combo, and you want to tutor. If neither of those will be the case, this card is below average and likely won’t see play.

Card rating: 4/10 (unless we see some really powerful combo card you want to draw every game)