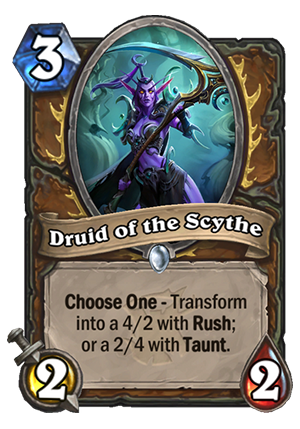 Druid of the Scythe is a 3 Mana Cost Common Druid Minion card from the The Witchwood set!

Druid of the Scythe Card Review

Neither 2/4 Taunt for 3, nor a 4/2 Rush for 3 would be good enough to put into your deck. Of course, the main advantage of those “Druid of the X” cards are the flexibility. The fact that you can pack two completely different cards into one and play the form that fits the current situation is good. But in order for that to work, both forms need to be at least above average, a card that COULD be playable by themselves.

Let’s start with the Taunt form. 2/4 Taunt for 3 is obviously just bad. We had a card like that and it has seen exactly zero play, simply because 2/4 are weak stats and Taunt doesn’t do much to improve them. You might want to play this only if you’re desperate. The fact that lots of early game minions have 3 health right now doesn’t help – with mostly 2/2’s and 3/2’s dominating the early game, it would be better. But as it is right now, it would often get cleared without your opponent having to sacrifice any minion, and you’d need to clean-up after.

Then, the 4/2 Rush form. This one is better, but it’s still a bit underwhelming. It’s like a Huffer (from Animal Companion) on demand, but Huffer is so strong, because it can go face. Remember how bad is it to get Huffer on 3 when you play against an Aggro deck with some small minions on the board already. With just 2 health, you can rarely trade it into something and make it survive. Even if you clear a 1-drop, your opponent can just ping it or trade some 1/1 into it. A card like Righteous Protector just blocks it completely – you end up trading 1 for 1 with a 1-drop, a terrible scenario.

4 damage to a minion is a bit like Shadow Bolt. It’s better, because it can still survive after trading into a 1 Attack minion, but it’s worse, because it can’t bypass Taunts. Shadow Bolt is not an amazing card, just like this one. For one more mana, you get Swipe, which not only can go face, but also deals 1 AoE damage to anything other than your main target.

Yes, the flexibility adds a few points, but I still think that overall it’s below average. I don’t think it will see play. Maybe in a Spiteful Druid, which obviously can’t run cheap spells to not ruin his synergies.