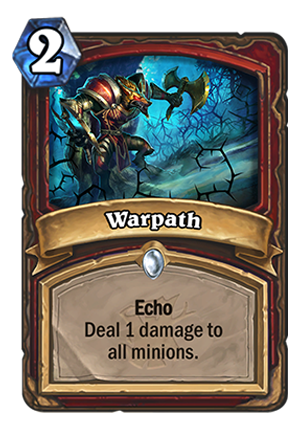 Warpath is a 2 Mana Cost Common Warrior Spell card from the The Witchwood set!

Echo Deal 1 damage to all minions.

This card is really strong. While I don’t think it’s on the power level of Sleep with the Fishes (which is leaving Standard), it is actually much more flexible. Not only it doesn’t need any activator, but IT can serve as an activator. So, this card is basically 5 cards in one, depending on which one you need: 2 mana 1 AoE damage, 4 mana 2 AoE damage etc. For example, at 2 activations it’s a 1 mana more expensive Volcanic Potion and at 4 activations it’s a bit like one mana more expensive Flamestrike (obviously, damaging your own side of the board can be both advantage and disadvantage depending on the board state).

The card has special synergy with other Warrior cards. For example, you can use it as an Execute activator if you need one. Warrior is also known for using cards that benefit from self damage. Acolyte of Pain is probably the best example. For example, playing Acolyte + this card three times on Turn 9 is a 3 damage AoE + drawing 3 cards. Which means that you’ve dealt 3 AoE damage, but instead of spending a card you’re a card up. It doesn’t necessarily seem best, but the thing is, that’s just one of the uses.

One important thing to remember is that it doesn’t deal all the damage up-front. That’s a big deal, and one of the reasons why Defile is so strong. For example, straight up 4 damage wouldn’t clear a Divine Shield minion – it would just pop the shield. This would pop the shield with first activation and then still deal damage to the minion itself. Same goes for Deathrattles – Paladin Adapts his Silver Hand Recruits to summon 1/1’s on death? Well, you can easily clear them both with this card.

The obvious downside of this card is that for its flexibility, you have to pay the hefty price – in mana crystals. Basically, at every step, the card is 1 or 2 mana more expensive than similarly working card (even more at 10 mana, because for 8 you can just clear the whole board with e.g. Twisting Nether). The upside, on the other hand, is damage being dealt in steps and the flexibility.

Another problem might be the state of Warrior class. Right now, Control Warrior is in a TERRIBLE spot, and the class is losing some key cards in the rotation, so they would have to print some really broken cards for it to see play. It also can’t be used in the Baku the Mooneater deck, if that will be a thing, obviously.

I’m already rating this pretty highly, but it can be even better IF they print something that synergizes with damage and Control Warrior wants to play. Because Rotface doesn’t count – it costs 8 mana so you can’t combo it with this card, and it will pretty much never survive until next turn.