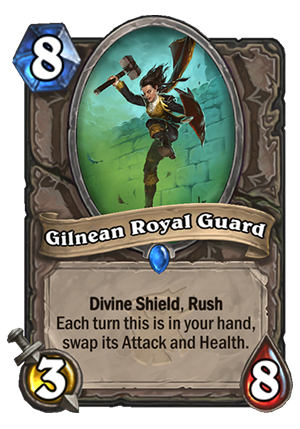 Gilnean Royal Guard is a 8 Mana Cost Rare Neutral Minion card from the The Witchwood set!

Divine Shield, Rush Each turn this is in your hand, swap its Attack and Health.

Admittedly, they kind of dropped the ball with Prince Liam.
Tweet

It’s probably the most powerful of the swap cards revealed so far, but is it good enough? You obviously don’t want to play it in any kind of Aggro or even Midrange deck, because it costs 8 mana. That’s a lot for a removal. But what about Control decks?

Again, I actually think that this card would be stronger if it was constantly in its 8/3 form. So late into the game, you rarely need the 3 damage to clear something. Divine Shield is much better on the high attack/low health minions too. With 8 damage, you can clear stuff like The Lich King or Mountain Giant or almost clear Voidlord and still have an 8/3 on the board. Even though the 8/3 will be rather easy to clear off, it might still be a 2 for 1 case for you. The 3/8 form might be more useful against Aggro decks, but usually if you’re losing on the board so late into the game, a card like that won’t really help you.

Anyway, I think that this might actually fit into some of the slower decks. Especially those with weak removals. Like, I don’t see Control Warlock or Control Mage wanting to use this, because they have lots of way to remove stuff more efficiently anyway. But how about, for example, some slower Druid deck? Druids have struggled with removing big stuff, and the ramp might make them take advantage of the 3/8 form too – if your opponent is still in the mid game, you might have a good target for the 3/8 Rush.

This is also one of those cards that MIGHT see play in a Lady in White deck. While it might not be the best card ever printed by itself, it’s definitely usable and after Lady in White, it’s going to be 8 mana 8/8 with Rush and Divine Shield – absolutely insane, as it should be able to remove almost every minion on the board and still leave the 8/8 body behind.

The main problem with this card is, again, that you can’t pick the form. It might be 3/8 on the turn your opponent drops The Lich King and 8/3 on the turn you have some 3/3 minion to clear. That’s the reason I still can’t rate it too highly, but I’m quite sure that so far it’s the best “swap” minion revealed.

P.S. And this card looks really busted in Arena. Charged Devilsaur is among the best Epics and it looks as good or maybe even better, and it’s Rare, so it will appear more often.