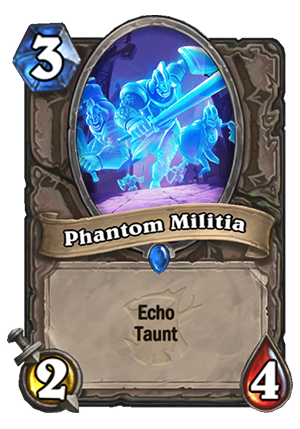 Phantom Militia is a 3 Mana Cost Rare Neutral Minion card from the The Witchwood set!

First card featuring the new mechanic – Echo. Or well, not exactly “first” – it was already present on Unstable Evolution. I like the fact that they print mechanics like that on a single card to test out the waters before going all in on adding multiple similar cards.

Echo is a very interesting mechanic. Echo cards are generally bad for their mana cost, that should always be the case. 2/4 Taunt for 3 is not playable in Constructed, just like a 1 mana Evolve for a single minion. Their power lies in the fact that they have great late game scaling, as they can be replayed as many times as you want.

Phantom Militia is… by itself it’s pretty mediocre. Right now, I don’t see a deck that would want to play it without any extra synergies. I mean, 3 mana 2/4 Taunt is bad, 6 mana 2x 2/4 Taunt is also bad, and 9 mana 3x 2/4 Taunt is also… yeah, bad. Of course, the flexibility adds a few points – having a Turn 3 play that can be played on Turn 9 if you top deck it. But that’s the thing, this specific card would probably see play in a slower deck, if anything. 2/4 for 3 is too slow for Aggro. And slow decks have plenty of things to do in the late game, they are never really in “top deck mode” so desperate that they need to squeeze as much value as they can from every 3-drop. It might be a solid discover choice from something like Stonehill Defender, but I just don’t feel like it’s good enough.

However, where this and potentially other Echo cards really shine are mana discounts. It was already confirmed that discounts from cards like Shadowstep or Emperor Thaurissan don’t apply to the other copies. But, the permanent discounts do. That’s why Shaman rolling a Radiant Elemental or Sorcerer's Apprentice with Unstable Evolution in hand means that he’s in for a ride. Discounts get MASSIVE advantage with Echo cards, since they apply to every copy. And so, any Echo spell will have amazing synergy with the minions I’ve mentioned.

What about Echo minions, though? Well, they also have their own, cool synergy. Summoning Portal is a Warlock card pretty much no one remembers, because well, it’s not a great one. Paying 4 mana for a 0/4 that you need to combo with something to even get value is not great. But the card might work really well with the Echo mechanic. Let’s take the Phantom Militia example. Normally, on Turn 10, you could play 3 copies. With Summoning Portal, you can play 6 copies. Summoning Portal + 6x 2/4 Taunt on the board sounds much better. You know how powerful can Spreading Plague vs a full board be, and this doesn’t even require any board from your opponent. Of course, you would never run both in a deck JUST to get that combo, as it would be a bit unreliable. But I think that in case other Echo minions that are either Neutral or available to Warlock get printed, it might be a thing. For example, with a 4 mana Echo card, you could drop 3 copies instead of normal 2, and then still have a Summoning Portal up – something your opponent absolutely needs to answer.

I also believe that we might see some Echo synergies, or other things that might make Echo cards more juicy. Right now, I don’t think that this card will see much play, if anything. But it might change when we see more cards.

P.S. Good Arena pick. A 2/4 Taunt for 3 is already playable and just about average (Squirming Tentacle). Adding the ability to play it 2 or 3 times in mid/late game is never a bad thing – top deck mode in Arena is much more common than in Constructed, and this is definitely one of the best 3-drop to top deck when you’re out of cards.