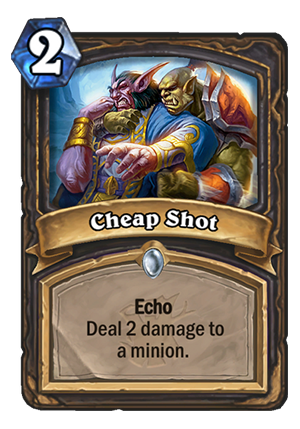 Cheap Shot is a 2 Mana Cost Common Rogue Spell card from the The Witchwood set!

Echo Deal 2 damage to a minion.

This card is cool. On the one hand, it seems like a worse Hunting Mastiff, which I rated at 6, but context is important. Not only is this a spell, this is a pretty cheap spell you can cast multiple times in Rogue, a class that benefits from such spells the most.

This is not a gamebreaking card, but the flexibility is what might make it good enough. It’s a bit like Forbidden Flame – you can deal 1 damage to a minion per mana point. Or rather, 2 per 2 mana points – that’s one of the disadvantages compared to FF. For example, when you’re at 3 mana, you can’t deal 3 damage, it jumps from 2 to 4 to 6 etc. On the other hand, the damage can be spread between multiple minions (that’s a big plus in Rogue, a class that might struggle against multiple minions), and each cast counts as a separate spell.

This looks like a solid Miracle Rogue card, because of the synergies. In the late game, you can play it 3 times and then drop 8/8 Edwin VanCleef, for example – deal 6 damage and play an 8/8 is quite good. It combos with Auctioneer if you’re missing other spells. This + Prep alone means 4 draws from Auctioneer on Turn 10. It doesn’t seem like much, but remember that it will be harder to get big Auctioneer turns now without Counterfeit Coin.

It also combos nicely with Spell Damage – if you play Bloodmage Thalnos and then cast it 4 times in the late game, that’s 4x 3 damage + Thalnos on the board.

While 2 damage to a minion is not very impressive, the flexibility and multiple synergies should make it a solid card in Miracle Rogue. That said, Miracle Rogue isn’t doing too well right now, so it’s hard to say how well it will work after the rotation.