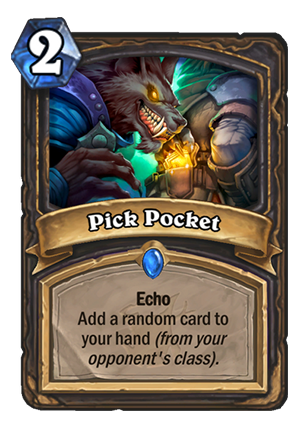 Pick Pocket is a 2 Mana Cost Rare Rogue Spell card from the The Witchwood set!

Echo Add a random card to your hand (from your opponent's class).

I’m really surprised by a pretty high rating of this card. For me, it seems almost unplayable. How many Rogue decks, outside of a dedicated “I steal cards from my opponent’s class” (which was terrible, by the way) used Burgle, which is more mana efficient?

I mean, sure, you COULD spend your whole Turn 8, for example, stealing 4 cards from your opponent’s class. You couldn’t do that with Burgle. But in what world would Rogue want to do that?

“Random cards from the opponent’s class” are mostly underwhelming. I’ve played my fair share of Swashburglar and I can clearly say that most of the random cards from it were bad. They could be straight up bad, they could not fit the playstyle of my deck, or even just require synergies I didn’t have (like Dragon synergies or Beast synergies etc.).

Rogue doesn’t really need pure value cards, like this one, especially since the value is bad. Even if we generously assume that only every second random card you get from this is bad, you still spend 8 mana (following my previous example) to gain two good cards.

Swashburglar was played, because it costed 1 mana and came with a 1/1 body that also pulled out Patches the Pirate out of your deck. Similarly, Hallucination was played, because it costed 1 mana and you could Discover a card instead (and you still were picking from 3 bad options sometimes). Those cards were flexible and could serve as a combo activator too, which is important. Echo cards are not exactly great combo activators, because you want to play them as many times as you can during the turn you play them.

Cheap Shot is better, because it’s a removal, it does something on the board, it HAS a tempo. Pick Pocket is a zero tempo card, it’s a pure value card and a pretty bad value card at that.

I’ve read that you’d want to play this in Tempo Rogue since Shaku, the Collector is rotating out and I didn’t know what to say. Really. This card is the best example of anti-tempo. The only deck you would want to put this in is either some sort of Control deck (and to be honest, there are better ways to generate value than this) or a Burgle deck that synergizes with cards from other classes. But since a lot of Burgle mechanics are rotating out and all we get instead (at least for now) is Spectral Cutlass, I’m not very optimistic.