Our Spiteful Druid deck list guide for The Boomsday Project expansion, will teach you the ins-and-outs of this deck! This Spiteful Druid guide includes Card Choices, Mulligans, Gameplay Strategy, and Card Substitutions!

Spiteful Druid is a deck based around its namesake: Spiteful Summoner. By removing any spells that would have otherwise gone in a similar list, Spiteful Summoner is guaranteed to hit Ultimate Infestation with its battlecry (provided at least one copy remains in the deck), summoning a 10-mana minion as early as turn 6 (or 5 with coin).

With the Year of the Raven Standard rotation Spiteful Druid becomes a lot better, not because it gained anything, but because it lost all its punishing 10-mana Spiteful summons. While Spiteful Summoner no longer creates Deathwing, Dragonlord or Y'Shaarj, Rage Unbound, the other three Old Gods (along with a couple other sub-optimal hits) are all out of the summoning pool too. This makes Emeriss and Sea Giant the worst you could possibly do. For 6 mana, 12/12 stats across two bodies isn’t anything to scoff at, and “highrolling” into Deathwing, Tyrantus and even Ultrasaur is more likely to happen than not.

Prior to the Standard rotation this deck almost looked like it was auto-completed. A lot of Druid’s power traditionally comes from its spells, and removing them all to optimize Spiteful Summoner left the deck with some pretty weak replacements. While many of the minions in this deck remain somewhat unimpressive, many of the other classes are in the same boat now. Many of the best 1 and 2 mana minions that top-tier decks would otherwise have played have rotated out, and the ever-looming presence of Voidlord has most decks running suboptimal tech minions that this deck had no choice but to include before. In a meta full of “trash” tier minions, this deck, which was already competitive when other decks could use better cards, is well positioned for success.

Most of the power in this deck lies with Spiteful Summoner and Prince Keleseth, so you’re looking to play those cards as soon as possible against most things. Up until turn 6, you’re trying to keep control of the board and maintain as much tempo as possible. If you’re ahead on turn 6 your Spiteful Summoner is a lot more likely to stick something big, and this will often win you the game outright. If not, you can out-value your opponent with Ultimate Infestation and finish your opponent off with a barrage of smaller minions. 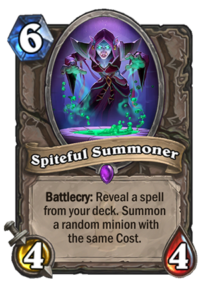 Against aggro you just have to stay alive until your opponent can’t keep up with you anymore. This list is filled with Taunt minions to protect your life total, and your early minions trade well with most early aggro boards. If your opponent is playing a pure aggro deck like Paladin than your minions eventually become too large for them to trade into efficiently. If you’ve been able to keep your life total out of burst range then you can take over the game from here. Try to keep your Taunt minions alive, in these matchups they are protecting your life, not your other minions.

Keeping your opponent’s Silver Hand Recruits off the board is more important than it’s been in a while. Odd Paladin has started running Level Up!, which can be devastating if they have any Recruits left from last turn. This deck has a lot of low attack, high health minions; use them to remove the Recruits so your opponent is forced to Level Up! a board that can’t attack right away.

There are so many Taunts in the deck that it doesn’t have too much issue with Odd Hunter. Hunter doesn’t have the powerhouse odd-costing cards that Paladin does and relies heavily on its Hero Power and Kill Command to close the game out. If you get past the early game without taking too much minion damage this match can be pretty easy, especially if you draw Malfurion the Pestilent. Mindbreaker can really shut them out of the game, especially if you can keep it protected behind a Taunt minion.

Against control you are the aggressor. Keep Spiteful Summoner in your opening hand and play it as soon as you can. Think about what removal your opponent is likely to have and do your best not to play into it. Don’t be afraid to play Ultimate Infestation if it will cause you to overdraw a little. By that point in the game, this deck cares very little about which specific cards it has in hand, and more that it has multiple things to play. Unlike other variants of Druid running the card, this deck has absolutely no other draw cards in it, so you can often play both Infestations without fatiguing.

Cube Warlock is the premier control deck right now. Silencing Possessed Lackey is important, as doing so slows the Cube-lock down significantly. If you silence the Voidlord that the Lackey summons they can just make more with Carnivorous Cube and Dark Pact. Mind Control Tech can be handy in this matchup if they have a desirable minion out alongside a Voidlord. Popping this Voidlord puts 3 Voidwalkers on the field which, if they have another minion, activates MCT’s battlecry, and with a little luck you can gain some momentum this way. This deck typically doesn’t play Siphon Soul so once you play your Spiteful Summoner you can often close the game out from there.

This deck runs a lot of filler cards, so there’s a lot of room for substitution. In general you want your minions to be on the cheaper side because you want to have tempo leading into your Spiteful Summoner turn, but you could also fit in some late game cards. Spiteful Summoner and Ultimate Infestation are the only mandatory cards in the deck.