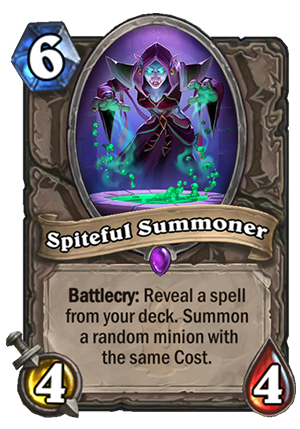 Spiteful Summoner is a 6 Mana Cost Epic Neutral Minion card from the Kobolds and Catacombs set!

Battlecry: Reveal a spell from your deck. Summon a random minion with the same Cost.

Sometimes she'll summon a Doomsayer. Out of spite.
Tweet

Before defaulting to Mage when we think of expensive spells, the most obvious thing at the moment is the Druid class and their Ultimate Infestations and Spreading Plagues. At 6 mana, this doesn’t need to hit something gigantic for you to get your money’s worth, but that’s not always the most important aspect of a card. Much like Faceless Summoner, you are looking to make a tempo play by getting a bunch of stats on the board. But what holds true for Mage decks running Frostbolt also holds true for Druids playing Wild Growth, etc. In fact, it’s true for just about any class – cheap spells are some of the best cards in Hearthstone that you can be playing and you would need a very serious reason not to (Prince Keleseth jumps to mind, though it can be argued even he is not that restrictive). Even if you end up skewing the odds enough, is the payoff really worth it? Faceless Summoner did not see almost any play and this card won’t be too different, even though making it neutral opens up a lot of potential. There are simply better things you can be doing for 6 mana, especially in some of the more obvious classes that this fits into, such as Druid, Mage, Priest and Warlock.