The Boomsday Project is just around the corner, so check out a list of all of the information you need to know prior to the release. We’ve got launch and release times, what you are getting free with the expansion, tips if this your first expansion launch, pre-purchase information, as well as a look at all the new stuff that is coming once the expansion launches!

What time of day is The Boomsday Project set to release/launch?

There are the official ESTIMATED times that The Boomsday Project will launch on.

When is the Puzzle Lab set to release/launch?

Just like the Monster Hunt, it looks like Puzzle Lab will be two weeks after the release of The Boomsday Project expansion. You can start solving equations in the Puzzle Lab on August 21st! Check out our Puzzle Lab Guide for more information on this single-player mode.

What am I Getting for Free?!

Remember that you will also get one guaranteed legendary in the first 10 packs you open for the expansion!

Once the Puzzle Lab launches on August 21st, you will also get another three free packs from The Boomsday Project.

I refer to most of these tips for every expansion and they continue to be useful to this day!

In the past it’s been easy to absentmindedly purchase the wrong packs, so make sure you are paying attention when you hit the purchase button!

Streamers buy a TON of packs, and if you’re on a budget and want to get your fix then I’d advise watching them open packs. It’s not exactly the same, but it can help ease your lust for packs.

It’s tough to not craft a bunch of cool looking Legendaries the day they come out, but if you’re on a budget you should just hang back and wait for the meta to settle a bit. The famous example of tons of people crafting Troggzor the Earthinator comes to mind, where it seemed like a great card but ended up never really seeing any play. This also goes for disenchanting cards! Finja, the Flying Star was not a popular Legendary when Mean Streets of Gadgetzan released, but ended up seeing quite a bit of play.

On the first day of most expansions there’s always a deck that stands out from the pack. This does NOT mean it’s going to stick around. I’ve seen versions of Handlock, Tempo Rogue, and even the early Shudderwock Shaman look very strong on the first day, but fall apart in the following days. Don’t invest too much into a deck on day one, because it might not even be good on day two!

Make sure you get this done before the expansion is released! If you plan on spending money on the game, this is usually the best investment. You get a lot of packs, and this time you even get a random Golden Legendary class card. There are two bundles available, but you can purchase both if you want to. 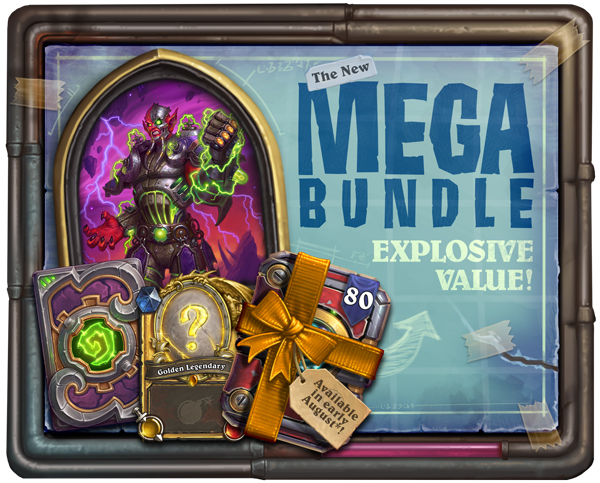 It contains 50 Boomsday Project card packs, the “Mecha-Jaraxxus” card back, and a random Golden Legendary card!

Check out our The Boomsday Project card list to get up to speed on the new expansion!

Each class gets their own Legendary spell! These are very powerful cards because you can only use one in your deck.

There’s a lot of new mech cards in this expansion, and some of them have the powerful new keyword: Magnetic. This gives you the option of fusing two mechs together! You can use this to buff the card on the board, giving it more stats and keywords. Check out a full list of the cards that have this keyword with our Magnetic Keyword Guide!

Omega cards have pretty good early game and can be played on curve, but if you draw them in the late game they have a powerful battlecry that makes them worth saving for 10-mana crystals!

Projects are cards that benefit both players. However, because you have control over the card, you can pair it with synergy that benefits you and hurts your opponent. You can also control the timing of when you play it, giving you the benefit and perhaps messing your opponent’s strategies.

Deck to Try in The Boomsday Project

We’ll be posting a ton of decks on the site when the expansion hits, but be sure to check some of our theorycraft deck guides prior to the release to get some great ideas for decks.

That’s it for now, keep an eye on this guide as the expansion grows closer to launch. We’ll be updating it with any important details that come out before the release!