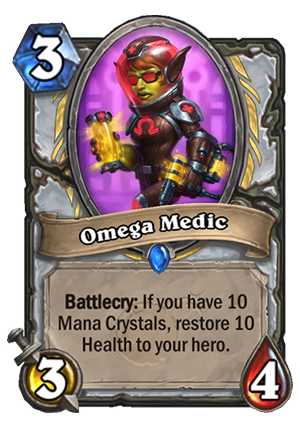 Omega Medic is a 3 Mana Cost Rare Priest Minion card from the The Boomsday Project set!

Battlecry: If you have 10 Mana Crystals, restore 10 health to your Hero.

She feels waiting for healing makes you appreciate it more.
Tweet

I feel like this is the strongest of the Omega cards so far. Even though its effect is moderate compared to the other two, the on-curve 3/4 body is more meaningful than a 4 mana 2/6 and especially a 5 mana 4/5. Still, you wouldn’t really want to put a 3 mana 3/4 without effect into your deck, so the 10 mana upside needs to make a difference.

Just like any other Omega card, this fits into a slow, Control Priest build. Both Combo Priest (Divine Spirit + Inner Fire) and Spiteful Priest want to close out the games sooner than Turn 10, so the Battlecry won’t be useful very often. On the other hand, Quest Priest, already has enough healing with Amara, Warden of Hope, which most often comes sooner than Turn 10 anyway. So Control Priest is just about the only deck that wants to play it.

The main issue I have with this card is that the healing is way, way more useful in the mid game than in the late game. When you play against Aggro, you often need to heal up to stabilize way earlier than Turn 10. Most of the games are over before that point, and this card won’t really help with swinging them back in the Priest’s favor. Sure, sometimes, in a longer game against Aggro it will come handy, but that’s not your usual anti-Aggro card.

The card would shine mostly in games vs Midrange decks, where Turn 10 is much more common, as well as against other slow decks with damage win conditions. For example, in the mirror matchups, to off-set the damage dealt by Shadowreaper Anduin or get out of range of Mind Blasts. It would also be good against more classic Combo decks like Freeze Mage, but those aren’t really a thing right now.

Whether the card will see play or not heavily depends on the meta, but I could see it being teched in case the kinds of matchups I’ve listed above get popular again. If they won’t – I don’t really see it being played.