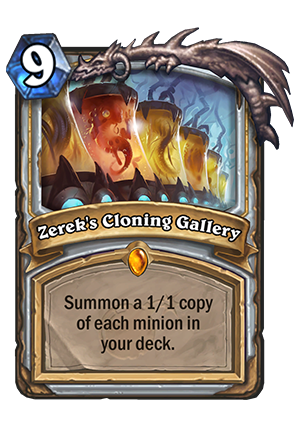 Summon a 1/1 copy of each minion in your deck.

Legendary Spells sure do seem crazy so far, and I like it. If you can put only one into your deck and have to pay 9 mana for it, you absolutely want the effect to be nuts.

This is a very interesting case, because I really have no clue how to rate it. The first deck that comes to mind is some kind of Combo Priest. But, the thing is, you can’t really guarantee that you won’t draw the combo minions before playing this card. Theoretically, if 2x Radiant Elemental, Prophet Velen and Malygos are still in your deck, you can do some absolutely crazy plays, like 20 damage Mind Blasts and 14 damage Holy Smites, all for 0 mana. But this is something to pull off once for the Trolden video, not a consistent combo. However, the card might STILL see play in that kind of deck for one obvious reason – in order to play your combo (with Greater Diamond Spellstone), you NEED to play all of your minions anyway. The deck already runs Shadow Essence for that, but it often misses. This card will 100% pull every single minion you have left in your deck onto the board, meaning that if you get absolutely lucky, you might just kill your opponent, and if you don’t, those minions still die and you have all of the minions ready to get revived with Spellstone. So while building a combo deck AROUND it is silly, it can go into existing Resurrect Priest decks and work there very well. Only Wild Pyromancer is out of question, as it will clear your entire board as soon as you play the first spell.

It would be pretty good in the Wild version of Big Priest too, but there are few issues. First of all – the deck doesn’t play many minions. Second – by the time it draws / can play this card, it also most likely draws a part of them. So if you could ALWAYS hit the 1/1 copies of your The Lich King, Obsidian Statue, Ragnaros the Firelord and Y'Shaarj, Rage Unbound, it would be great, but realistically, you will maybe get 2 or 3 minions on average. And that’s probably not good enough.

Maybe play it as an extra win condition in a deck with lots of Deathrattles? For example, if you play some kind of Midrange Deathrattle deck, you will most likely have cards like Devilsaur Egg, Coffin Crasher, maybe even Cairne Bloodhoof (and more stuff like that) left in your deck, and flooding the board with 1/1 copies of those would be massive just for their effects.

Like I’ve said, the effect is so crazy that it’s hard to rate. However, I don’t see a world in which summoning a full board of 1/1 copies of minions in your deck wouldn’t be good in some deck. Because of its very high cost, I don’t believe that it will be broken, but this kind of effect is just MASSIVE in the right deck, like the Deathrattle one I’ve mentioned. And maybe, just maybe we get more “clone” synergy later down the road? After all, that’s the Priest’s main theme this expansion.