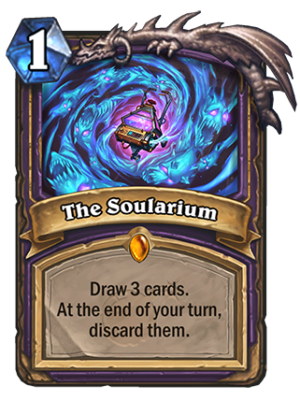 The Soularium is a 1 Mana Cost Legendary Warlock Spell card from the The Boomsday Project set!

Draw 3 cards. At the end of your turn, discard them.

It might be one of the most busted cards from the expansion. And despite being rated really highly, I think that lots of folks are still underestimating it. While it will basically only fit into aggressive Warlock builds (Zoo and such), the card will be extremely powerful in those kind of decks.

It might seem that card draw is not great in Zoo, because of the Hero Power. Normally that’s true – but the fact that it draws you THREE cards for 1 mana makes it pretty insane. Even in the worst case scenario, if you end up playing only one of those cards and the other 2 get discarded, it’s like a Tracking. And that’s the worst case. Okay, Tracking is a bit better, because you can play it on T1 and keep the card for later, but that’s a non-issue given the potential upside. Playing two of them already makes it great, and if you manage to play all 3, then it’s even better. Looking at the current Heal Zoo deck, it runs out of cards very quickly. In the mid/late game, you have to tap every turn, and while getting 2 cards per turn is good, it’s often not enough. If you end up with two 1-drops, then you have an extremely weak turn. If you play this later in the game, you will be able to play all 3 cards very often, maybe even tap on top of that.

Of course, the card is also very useful in any kind of Discard Warlock. Not only it can be used to accelerate the Quest (Lakkari Sacrifice) very, very well (if you just play it and don’t use any of the cards you got, that’s +3 for the Quest for 1 mana), but it makes sense in Wild in a more oldschool Warlock build. Drawing Silverware Golem would be great, playing this while having Malchezaar's Imp on the Battlefield would basically negate the Discard downside etc.

This card will 100% see play in Zoo, because it’s very, very strong. At the same time, it won’t boost the slower Warlock archetypes – not only they don’t really need more draw most of the time (especially Even Warlock), but it could potentially hit an expensive card you can’t play and don’t want to lose. Like, you could discard Bloodreaver Gul'dan, even if you play this on Turn 10. It works in Zoo, because the individual cards aren’t that important, the deck doesn’t run a single card it just absolutely needs to perform its game plan.