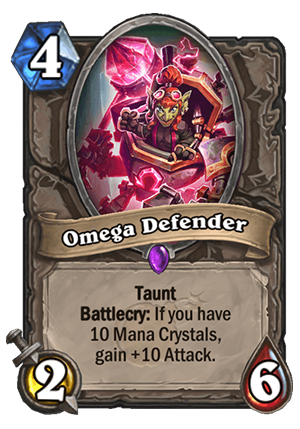 Omega Defender is a 4 Mana Cost Epic Neutral Minion card from the The Boomsday Project set!

Taunt Battlecry: If you have 10 Mana Crystals, gain +10 Attack.

That’s a pretty interesting concept. It takes the “late game scaling” to another level. Generally, cards that are solid in the early/mid game, but also useful in the late game are great. This is a bit different. It’s average on the curve, but insane in the late game. 4 mana 12/6 Taunt is just nuts, but 4 mana 2/6 Taunt is literally Stegodon, a card that has seen exactly zero Constructed play.

When it comes to Omega cards, it’s clear that Druid will have a massive advantage at activating the Battlecry. After all, it’s the class that can get to 10 mana most easily, and now with the Biology Project it might be even easier. This card in particular doesn’t even ruin your Oaken Summons if you want to play it. While it’s worse than Ironwood Golem, a 2/6 Taunt with 6 Armor for 4 mana is still alright. So Big Druid might want to play it. On the other hand, it kind of messes up with your Master Oakheart, since it can be pulled out instead of Dragonhatcher, and that combo is obviously nuts.

Another deck that might want to run it is Taunt/Quest Warrior. Okay play on the curve, but gets a massive boost in the late game. That said, think that Taunt Warrior is already good enough after it finishes the Quest, so it might not need it.

Then again, Omega cards (not this one in particular) can be decent in Shudderwock Shaman. Not the current, combo build, but more like a Midrange/Control deck with Shudderwock finisher. Shudderwock will be most likely played when you already have 10 mana crystals, so all of the effects would go off. So you’d end up with +10 Attack on your Shudderwock in that case. Yes, this doesn’t seem very good, but other Omega cards might do something else – like heal you, deal damage etc.

Omega Defender is a really, really powerful Arena card. I mean, Stegodon is an okay 4-drop to pick. It’s above average, and Arena decks are filled with above average cards. So you basically get a Stegodon that gets a MASSIVE boost in the late game. Not only it’s a solid card on the curve, but it becomes a game-winning topdeck.

But in Constructed? Omega cards might have some potential if the effects will be really powerful. This one… isn’t THAT good. Of course, I’m not saying that a 4 mana 12/6 is bad, but a bunch of stats isn’t really something you want to run a suboptimal mid-game card for. I just don’t see a deck that would want to run it. Maybe some Druid deck instead of Ironwood Golem, but it heavily depends on the meta – the extra point of attack on Golem makes a big difference against lots of the early game minions. Also, remember that Turns 1-9 are usually majority of the game. So for the majority of the game this card is… pretty meh. So I don’t think that a pile of stats is worth that kind of sacrifice.