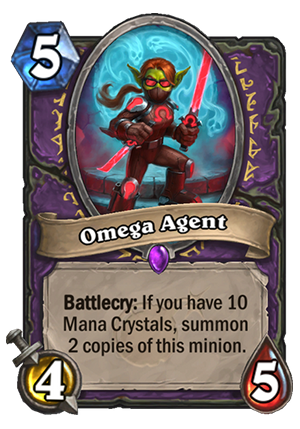 Omega Agent is a 5 Mana Cost Epic Warlock Minion card from the The Boomsday Project set!

Battlecry: If you have 10 Mana Crystals, summon 2 copies of this minion.

They don't just find the truth. They give it a ten second head start, then hunt it down.
Tweet

It’s the most polarizing Omega card revealed so far. On the one hand, it has the best Turn 10 effect – summoning two extra 4/5’s is better than gaining +10 Attack on a single minion or healing for 10 in Priest (which already has access to lots of healing cards). On the other hand, it has the weakest on curve stats so far. 4 mana 2/6 Taunt is passable – it’s passes the vanilla test, it’s Stegodon power level. 3 mana 3/4 is also okay play on Turn 3 – obviously you would never play a vanilla 3/4 with no synergies in Constructed, but it’s still something you CAN drop on T3 and not be sad about it. But this one is different. 5 mana 4/5 with no text or keywords is just terrible. It would have to cost 1 less mana to be in line with the other two cards and be a vanilla card.

Unlike the other two, you pretty much never want to drop this one before you hit 10 mana. That’s why even though in theory an effect like that would fit a Zoo Warlock, in reality it’s a very bad Zoo card. Unless you go for a slower, Midrange build (and Zoo haven’t been built that since Demon Zoo a few years back), most of your games end by the time you hit Turn 7-8. 10 mana is a lot. It’s so much that Zoo builds have even cut the Bloodreaver Gul'dan, and I’d play the DK Hero over this card any time – you will revive a solid board anyway, but you will also get 5 Armor and upgrade your Hero Power. Not to mention Discard effects such as Soulfire or Doomguard. This card will get discarded before you even get to play it most of the time, since it’s really clunky.

So maybe in slower builds? Well, on the one hand, this makes more sense. A slower Warlock deck can afford a few dead cards, it’s not that big of a deal. And Turn 10 mark is much more realistic for that build. In slow Warlock, it can work a bit like an easier to activate Dragoncaller Alanna. 3x 4/5 minion for 5 mana is amazing in the late game, it puts lots of pressure and is pretty difficult to remove. But the problem here is – what deck would you want to play it in? Even Warlock is not an option, because this card is Odd-costed. Cube Warlock, maybe? But then again, Cube Warlock is also more aggressive, often wants to finish the Control games faster and is a pretty tight deck – I don’t think that it could cut anything to play those.

That’s why ultimately, while it might work in theory in some slow Warlock builds, I don’t really see it being good in an actual, realistic scenario. Most of the builds either don’t want to play it or can’t. It might fit into some slow Midrange or Control build we don’t have in the game yet, since it has some potential, but it just seems difficult to put into any deck right now.