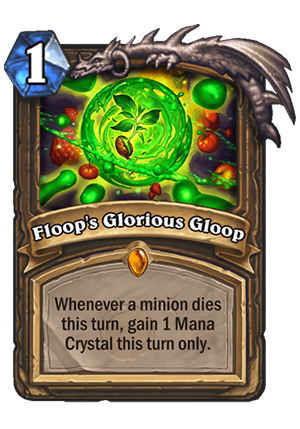 Whenever a minion dies this turn, gain 1 Mana Crystal this turn only.

What lots of folks seem to be missing is that this card gives you +1 mana for each MINION that dies, not every FRIENDLY MINION. It basically means that clearing opponent’s stuff also makes you gain extra mana. Because of that, I believe that this card can be insanely powerful in Token Druid deck, because you end up trading stuff very often. We all know that pre-nerf Innervate was a really good card, and it takes 3 minions dying for this to become one (more or less).

Just for example, if you have some minions on the board, your opponent has some, and you end up trading 2 of yours into 2 of the opponent’s, that gives you 4 mana for 1 mana = +3 mana. That’s crazy good, and it’s not some outlandish scenario.

You COULD also play it in Malygos deck to gain lots of extra mana. For example, you might drop Malygos one turn, then drop Flobbidinous Floop next turn, play this card, Swipe face destroying an entire board, get some extra mana and either play 2nd Swipe or Faceless and Moonfires. But I don’t think that Malygos deck will have space for this card.

This card will be pretty situational, so it definitely won’t be as widespread as the old Innervate, but it has a lot of potential to be broken in the right deck and in the right meta.