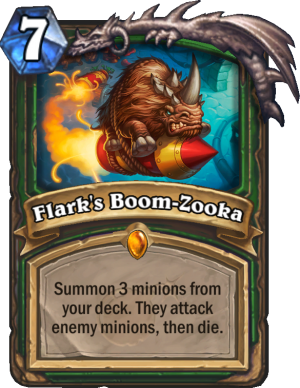 Flark’s Boom-Zooka is a 7 Mana Cost Legendary Hunter Spell card from the The Boomsday Project set!

Summon 3 minions from your deck. they attack enemy minions, then die.

It used to be a Ba-zooka but we ran out of sheep.
Tweet

When it comes to the flavor, this might be my favorite expansion so far. The card’s design is just so cool! Like this one. You’re a Hunter, so what are you doing with your minons? Shoot them on the rockets straight from your deck, so they can attack the opponent’s minions and explode. Exactly.

This seems like a fit into a kind of Big/Recruit Hunter deck, but not just any. For example, you would really want to cut most of the low cost stuff, such as Fire Fly or Stitched Tracker. You basically don’t want to summon 1/2’s or 2/2’s with this. You want bigger minions, with Deathrattles. That’s the best way to utilize this card – stuff like Savannah Highmane and Abominable Bowman, for example. Cards that will probably clear something and then stick another minion to the board. This card is bad as a removal only, and bad as a board fill only (I mean, pulling out Devilsaur Egg gives you 5/5, but it costs 8 mana, so not amazing) – you really need a mix of both.

Making this card work might be a huge deck building challenge, not the first time in this expansion. It will require lots and lots of theorycrating, and it might not even work in the end. Having to cut absolutely every single small-midrange minion, as well as minion such as Carnivorous Cube and Witchwood Grizzly (because that’s not something you want to pull out with this) might make the deck bad. Maybe something like an early-mid game shell of Spell Hunter, with a late game huge Deathrattle finisher? Yeah… this is one of the cards that can really go either way, and will need to playtest it first before really saying.

Card rating: Honestly, either 1/10 or 10/10. I’m leaning towards it not working, but I might be absolutely surprised.