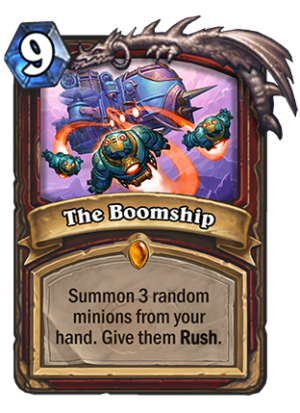 The Boomship is a 9 Mana Cost Legendary Warrior Spell card from the The Boomsday Project set!

Summon 3 random minions from your hand. Give them Rush.

Even though Dr. Boom, Mad Genius is a Mech-centered card, his Legendary spell doesn’t necessarily seem to be one (even though the artwork would suggest otherwise). While you COULD play this in a slower Mech Warrior, it seems a bit redundant. Your Mechs should already have Rush quite often when you play them, and you might have some cheap stuff in your hand, so it would get pretty awkward.

However, where this spell might shine is Big/Recruit Warrior. You often end up with those awkward hands, where you draw your big minions before you can Recruit them. If that’s the case, you can just summon all of them on the board and give them Rush. It’s a massive play, because not only you clear 3 minions (most likely), but you end up with a big board. Big Warrior plays cards like Charged Devilsaur or Grommash Hellscream too, which means that a big burst turn is also possible. To be honest, you COULD even build a combo deck around it – 2x Devilsaur + Grom + Inner Rage is 26 damage. But that’s a 5 cards combo and it gets stopped by Taunts, so it might not be the best thing ever.

Pretty cool card, it won’t fit into many Warrior decks, but it can be useful in the slow builds running big minions. And maybe some combo deck will be built around it eventually.