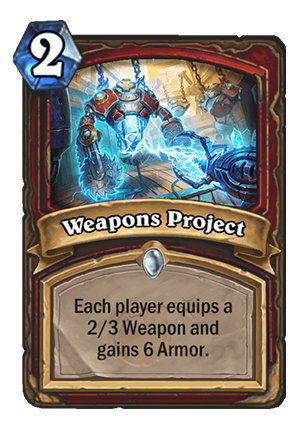 Weapons Project is a 2 Mana Cost Common Warrior Spell card from the The Boomsday Project set!

Each player equips a 2/3 Weapon and gains 6 Armor.

Very interesting design, probably my favorite “Project” card of the set. While it seems weird, it has so many applications if you play it in the right deck and use at the right time. Despite the effect being mirrored, it really isn’t – majority of the time you’re going to take advantage of it more than your opponent will.

First, against Aggro. While you give your opponent a 2/3 weapon, you also gain 6 Armor, so those effects will usually negate each other (as your opponent will likely use that weapon to hit you anyway). Since he will be the one playing multiple small minions, you will utilize that weapon better. And his Armor is basically useless most of the time. Honestly, against a deck like the current Heal Zoo, giving them Armor before they take damage might even be a way to disrupt their game plan. Neat! Plus if you face a weapon deck, you might actually be able to replace their current weapon. Let’s say that Hunter plays an Eaglehorn Bow, by giving them a 2/3 weapon you will destroy it.

Against Control, on the other hand, this can be a tech card vs Legendary Weapons. Druid playing Twig of the World Tree for the combo? Warlock running Skull of the Man'ari? Mage with Aluneth? You can get rid of those. Plus, if you play some sort of weapon removal, especially Harrison Jones, you can combo those two cards really nicely. You will end up with 6 extra Armor, 2/3 weapon, 5/4 on the board and +1 card advantage for 7 mana, while your opponent ends up with 6 mana. Really solid move.

Plus, sometimes the extra Armor might come handy if you need a cheap way of activating Shield Slam or Reckless Flurry.

Very interesting card, not straightforward and has some downsides (it’s mirorred, after all), but I feel like it should see a decent amounts of play in Control builds.