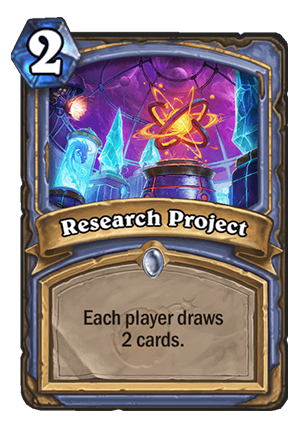 Research Project is a 2 Mana Cost Common Mage Spell card from the The Boomsday Project set!

Coldlight Oracle for Mage, in a form of a spell. 1 mana cheaper, but without a 2/2 body. However, the body part can basically be ignored – Coldlight was never played for the body in Mage. The card has seen play in slow, combo decks such as Freeze Mage and Exodia Mage simply to cycle more. Those kind of uninteractive decks didn’t really care about opponent drawing cards most of the time, because their cards were much more important. Getting to the stalls, freezes, and finally the win condition – that’s what this kind of card is good for.

As much as I’d call it really strong last year, it’s really hard to say right now. With Ice Block rotating out, those kind of uninteractive shenanigans are significantly weaker right now. Maybe if Exodia is still played, it will be used to cycle faster. But in a regular Mage deck, you don’t really want to give your opponents more draw. Even in the Tempo Mage, more draws for the opponent means that they will more likely have a way to heal up etc. And while you value your draws more than your opponent’s, you get only +1 card advantage and have to spend mana, they get those 2 cards absolutely for free.

Might see play in Wild, where Ice Block still exists. Or maybe in some combo deck that wants to cycle as quickly as possible. But overall I don’t think that it’s a good card since Ice Block is out of the Standard.