Druids are the guardians of nature. They draw energy from everything that surrounds them to unleash deadly force on the enemies or restore life to their allies. The power of shapeshifting allows them to take many forms, increasing their defensive and offensive abilities, speed, or even allowing them to fly when needed.

Druid is one of the most versatile classes. They can fit into many different roles – dealing massive physical or magical damage, protecting allies in the Bear Form, or bringing back allies into the battle with their healing spells.

In Hearthstone, Druid class is represented by the Malfurion Stormrage. At this point, Druid is the only class with no alternative Hero available. 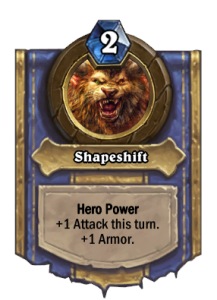 Druid’s Hero Power is Shapeshift. After using it, Druid gains +1 Attack (for one turn only) and +1 Armor (permanently). It’s flexible when compared to most of the other Hero Powers, as it can be used both offensively and defensively. Shapeshift is utilized to clear small minions, finish off bigger minions after you drop them to one health, deal a small amount of damage to the opponent’s Hero, or just accumulate a bit of Armor over time.

The first unique Druid mechanic is Choose One. Multiple class cards (like Wrath, Nourish or Druid of the Claw) give you two options when you play them. This flexible mechanic allows Druid to adjust the cards’ effects to the situation. A common theme in the Choose One cards is having one offensive and one defensive option. Feral Rage is a great example of that – the card is really powerful, because you can use it to gain Attack and kill a minion or push for lethal damage, or you can gain Armor when you’re falling low on Health.

Druid’s most basic theme is mana manipulation in form of gaining extra mana crystals through multiple effects (usually simply called “ramp”). This is a biggest strength of the class, allowing some Druid decks to stay 2 or 3 mana ahead of the opponent and playing much bigger minions than they normally could. Ramp was featured as soon as in the Basic and Classic sets, through the cards like Wild Growth and Nourish. The ramp cards are generally permanent (e.g. Jade Blossom, Mire Keeper), but Druid has access to some different ways to manipulate mana too – like gaining temporary mana crystals (Innervate), refreshing the mana crystals (Kun the Forgotten King) or reducing the cost of minion in the deck (Jungle Giants -> Barnabus the Stomper).

There are also some ongoing themes when it comes to the Druid cards. When new cards are released, there is a significant chance that some of them will fall into one of those categories:

Here are the Druid decks you can use on the ladder in the current meta. While not every deck listed here is high tier, they all should be viable options, especially to climb through the lower ranks.

Token Druid itself is a very old archetype. It was played back in Classic, utilizing the Violet Teacher + Power of the Wild combos. However, after the Un’Goro’s release, people have started playing a much faster, more aggressive version of the deck, and that version is now mostly associated with the deck’s name. The deck plays very similarly to the old Egg Druid. Even though the best Eggs (Nerubian Egg, Dragon Egg) have rotated out, this deck has a very similar play style of flooding the board with small minions and then buffing them.

Aggressive Druid decks, while not very popular, are a significant force in the current meta. Cards like Dire Mole and Corridor Creeper have made the deck stronger and even more synergistic. However, Druid didn’t really get a dedicated, Aggro card this time around, and because other decks have grew even stronger, it places around Tier 2.

Jade Druid is an archetype introduced with the Mean Streets of Gadgetzan expansion. It’s a Midrange deck focused on the snowballing throughout the game. During the first turns, it tries to ramp up its mana pool with Wild Growth and Jade Blossom.

Its main offensive tool are the ever-growing Jade Golems. Each time Druid summons a Jade Golem, it gets +1/+1 when compared to the previous one. They start small, at 1/1, but they can grow out of control really quickly. Your first Jade Golems are usually negative tempo plays – e.g. Jade Spirit is a 4 mana 2/3 that summons a 1/1. At the same time, each Jade card has a lot of late game potential – now imagine the same Jade Spirit when Druid is at 8/8 already. 4 mana 2/3 + 8/8 is incredibly strong both value and tempo-wise.

Jade Druid is also one of the two meta decks that can “go infinite” and never fatigue. Since Jade Idol has an option to shuffle three more copies of itself into the Druid’s deck, it can generate infinite threats in the long run. It makes Jade Druid a perfect counter for any slow, value-oriented deck. Knights of the Frozen Throne added a way to stop that – Skulking Geist – but it’s still not a tech used by every deck.

Big, or Ramp Druid is one of the oldest archetype in Hearthstone. The deck’s name comes from MTG, specifically from a card named Rampant Growth, which is basically a sister card to the Hearthstone’s Wild Growth. Ramp Druid is a deck based around the mana acceleration – it wants to get to the late game fast and pump out big threat after big threat, which hopefully won’t be answered by the opponent. Ramp Druid was always tied to the Taunt cards. Since the deck starts really slowly, Taunt cards allowed it to get back into the game by forcing the opponent to make trades.

The Kobolds & Catacombs version features a pretty “cheesy” combo in a form of Master Oakheart + Dragonhatcher. Playing Oakheart on Turn 9 results in a 5/5 + 2/4 + 3/3 (if it’s still in the deck) + a random big Dragon from your deck. It’s a huge swing turn, and it becomes even better if your opponent can’t get rid of Dragonhatcher for some reason (because then it will pull another big Dragon out).

If you’re a new player without a big collection, you might be looking for a way to play Druid without spending a lot of your Dust on the Legendaries.

This deck is a basic Ramp Druid. The name comes from “ramping up” the mana – thanks to the cards like Wild Growth and Innervate, you’re going to play bigger threats than you normally should on a given turn. If utilized correctly, it puts Druid at a big advantage – thanks to the Wild Growth, he can play the late game minions quicker than the opponent, while Innervate allows him to overwhelm the opponent with a single powerful play at the cost of card advantage (you have to use an extra card to gain those two points of mana).

Druid is generally a good starting choice. The class’ mechanics are very easy, basic cards are good and the gameplay is rather straightforward.

Luckily for F2P players, Jade Druid keeps a big part of its strength even when played on the budget. Most of the core cards from the deck, and the reason why it’s strong (ever-growing Jade Golems) are kept even without Epics or Legendaries. By removing the higher rarity cards this deck loses two things – the ability to snowball Jades easier (Aya Blackpaw) and a very powerful card draw / removal mechanic (Ultimate Infestation). While Aya can’t be replaced and you’ll have to play with a slower Jade ramp, Ultimate Infestation is kind of substituted by Gadgetzan Auctioneer. It was the card Jade Druid used before Ultimate Infestation was introduced, and it still server a very similar purpose – with many cheap spells, you can cycle through your deck quickly and efficiently. Sadly, Innervate nerf had an indirect impact on the power of this card, because now it’s hard to perform really long draw chains before Turn 10.

Still, Jade Druid is a solid option for relatively new players. The deck isn’t that hard and it’s one of the slowest decks which can be played on the budget (most of them require multiple Epics and Legendaries). On top of that, since Ultimate Infestation is one of the most powerful Epics to craft, if you decide to upgrade it a bit, you won’t feel bad, because the card will see much more play even once this deck rotates out.

Kobolds & Catacombs didn’t add much to the deck. The only new card it runs is Lesser Jasper Spellstone. It’s another early game removal and cheap spell to combo with Auctioneer. Since high tempo, aggressive decks are very popular on the ladder right now, even the first part of the removal isn’t that bad – and in the slower matchups you can keep it in your hand for a while to have a very efficient 6 damage for 1 mana removal later in the game.

Every 2 levels, up to level 10, you will get two copies of a Basic class card. A lot of those cards are staple, so it’s heavily advised to highly prioritize getting every class to level 10.