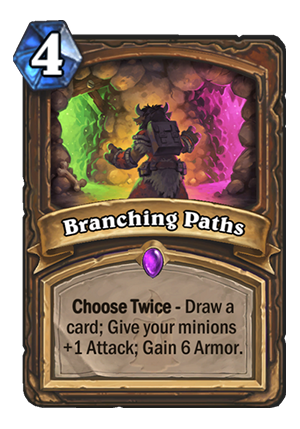 Branching Paths is a 4 Mana Cost Epic Druid Spell card from the Kobolds and Catacombs set!

Three paths diverged in a darkened hall, and I –
I took the one less traveled by,
And got eaten by a slime.
Tweet

Even though Choose Twice is its own unique thing and doesn’t work with cards like Fandral Staghelm, it’s fascinating to watch Blizzard push the boundaries of mechanics. What’s particularly interesting about this card is the ability to choose the same option twice, increasing its already great versatility. It’s easy to compare this to other cards its modes can form, such as Greater Healing Potion when you choose 6 armor twice or Arcane Intellect/Nourish when you pick the card draw two times in a row, or Savage Roar. But I’m not too convinced this is the proper approach. Branching Paths is very obviously not nearly as good at doing what other cards already do, rather it provides you a slightly overpriced toolbox where you pay for the luxury of being able to make your custom card for the right situation, very reminiscent of how Kazakus‘ potions work.

Is that price worth it? As it turns out, it most often is. At the very least Branching Paths draws cards, so it can never be a bad card no matter what, and it only gets better from there. Depending on whether or not your deck might need its other modes on even a semi-regularly basis, this will determine whether you play this or something else for card draw specifically. It’s easy to imagine a controlling style of Druid deck (that perhaps summons large men?) which will want the armor and the draw, especially one that plays the Jasper Spellstone and is looking for efficient ways to upgrade it. Even though it is also an attack buff with versatility, aggressive decks are often not inclined to pay 4 mana when they can pay less, given that they only really want one of Branching Paths‘ effects and definitely don’t want one of them. 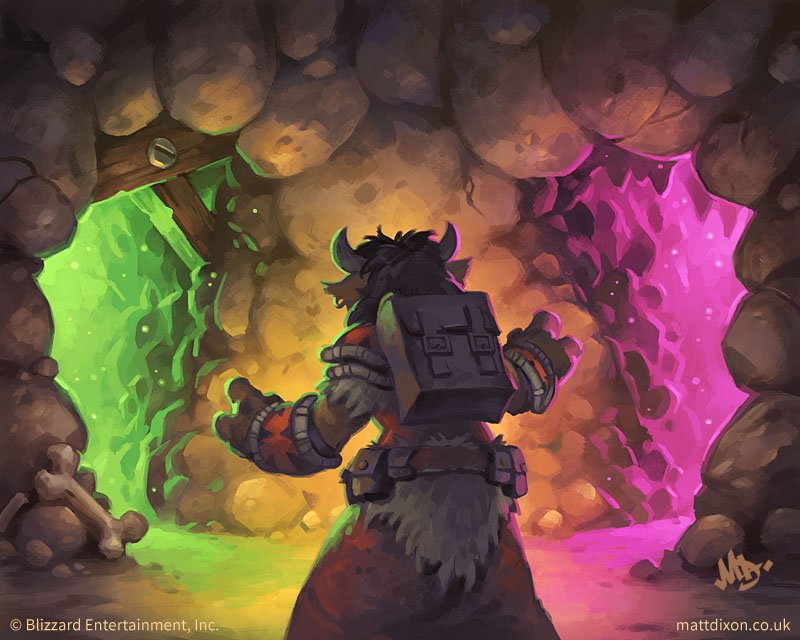