Our Big Druid deck list guide for the Kobolds and Catacombs expansion will teach you how to play this ramp based Druid list. Our Big Druid guide includes Mulligans, Gameplay Strategy, Card Substitutions, and Combos/Synergies!

Ramp druid (Big Druid) is an older archetype of druid that has been missing from the competitive scene for some time. The deck has always had a pretty straightforward game-plan of ramping early and deploying big threats turn after turn in the mid and late-game. The newest iteration of ramp druid is no different in terms of its plan of attack.

Big Druid isn’t a great deck at the moment, but after the nerfs hit this month it is likely to start to see play again. Big Druid has had a history of gaining popularity at the end of Expansion cycles, and towards the end of Kobolds and Catacombs could be no different.

The deck list is updated, but the guide below is not up-to-date! We will be updating the guide soon after the nerfs.

Ramp Druid is pretty straightforward and its play-style never truly deviates too much from one match to the next, regardless of match-up. You want to be playing early ramp, gaining a mana advantage and start to deploy a massive minion every turn for the rest of the game. Ramp Druid is a solid choice in a slower metagame like this because it will eventually out-value nearly every slower midrange or control deck since each of its threats are must-kills.

When finding yourself facing aggressive strategies, you’re only real goal for the early game is to survive. You are going to want to pair your early ramp card with removal and transition that into deploying big minions (preferably the ones with taunt). You will usually end games by landing a massive taunt minion and casting an Earthen Scales on it to put yourself out of any potential lethal your opponent may have.

Much like a control deck, Ramp Druid wants to stabilize the board early by clearing off early minions and mitigating as much of the opponent’s damage as possible.

The cards that will usually close out a game for you versus an aggressive strategy are: Earthen Scales, Spreading Plague, Primordial Drake, and Deathwing. These cards are the ones that will close out the games, but you need to bridge the gap between the early game and the late/mid-game when you can deploy these cards. It is worth noting that these cards are not good enough on their own most of the time. They are used to get yourself out of burn range or stop an aggressive player’s desperation push and need to have a relatively controlled game-state to be played on. A controlled game-state can be considered as one where your opponent has few cards in hand and few threats on the board. Once you deal with the remaining threats on board and deploy one of the cards listed above, you are usually going to be favored from that position.

The game-plan you are enacting against control decks is much different from that against aggro decks. You want to ramp early (surprised?) and deploy threats for each turn for as long as the game lasts. The reason why ramp druid is so good versus control strategies is that your sheer number of minions outnumbers their removal. 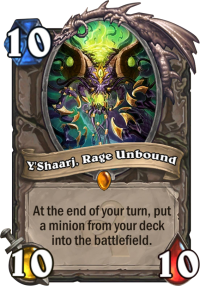 The name of the game here is value. You want to extract as much potential value as possible out of each of your minions. This means holding onto your minions if your opponent has not played a board-clear yet and deploying your card-generating minions first, like The Lich King, Medivh, the Guardian, and Y'Shaarj, Rage Unbound. These are the cards that give control decks fits because they are almost always going to be 2-for-1s or better in terms of card-for-card value.

Generally speaking, you are going to be very favored against control decks as long as you don’t overextend into their board clears and manage your minions carefully. While these are favorable matchups, you can easily lose them if you throw your minions at the board with no regard for removal or board clears.

You also have access to one of the largest value cards in the game now with Ultimate Infestation. Landing Kun the Forgotten King on the board, and following it up with UI (with Atiesh, maybe?) and even potentially removing one of your opponent’s minions can outright win you a game.

A major mistake that many novice Druid players make is using their coin to Wild Growth when it is unnecessary. When using the coin to cast Wild Growth, you should be asking yourself, “Do I have anything to play next turn?” If the answer is no, hold on to your coin so you can jump ahead a turn later in the game. It may make sense to coin out Wild Growth, since you essentially refund the coin for every turn after that (you use a mana crystal to gain the mana crystal permanently), but if you coin out Growth and then do nothing the turn after you pretty much threw away a coin for no reason when you could have saved it to hold on to and use the free mana crystal for later.

Some of the Legendaries in this deck are pretty irreplaceable. Y'Shaarj, Rage Unbound being the main one, with the main group of Dragons also being very important. Ysera can be included if you are missing something like Deathwing or maybe even Kun the Forgotten King. This particular group of Legendaries is fairly optimized, but if you are missing one you can try sticking in various big Legendaries like Onyxia, Soggoth the Slitherer, or Tyrantus if you have them. Nozdormu is even a possibility if its just sitting in your collection, it can be powerful especially against something like Highlander Priest because they won’t expect it and need long turns to plot out their combo.