Scholomance Academy looks set to shake up the Hearthstone meta in just a few days, but can it bring about any fundamental changes to the best deck types? Ashes of Outland has been dominated by heavy tempo swings and control decks have been largely absent from the meta. Can the new tools from Scholomance Academy change this?

In this article, I take a look at the prospects of control decks in the upcoming meta and showcase four theorycrafted candidates to take up the mantle and defend control decks’ legacy.

Highlander Warrior was doing fine before the rotation, but it disappeared completely in Ashes of Outland. Powerful swing turns were one of the reasons for the archetype’s fall, but the Standard rotation was the main reason: Warrior had an abundance of control cards before the rotation and a far smaller toolkit after it.

In Ashes of Outland, Control Bomb Warrior has been a playable archetype, and it may remain as such in Scholomance Academy as well. However, I’m more interested in whether there can be another Control Warrior in the new expansion, and the most likely new candidate is the return of Highlander Warrior. 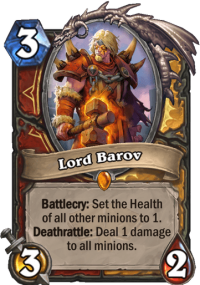 Scholomance Academy brings new removal tools for Warrior: Lord Barov, Coerce, Athletic Studies, and Reaper's Scythe help to bolster Warrior’s toolkit and may bring enough variety to bring Highlander Warrior back. There are just so many ways to activate a board clear with Lord Barov and I am really looking forward to playing some Rush minions a turn earlier than they should be with the help of Athletic Studies.

But what kind of Highlander Warrior? Will it be a fatigue deck that outlasts the opponent, perhaps with a bit of Archivist Elysiana in the mix? I’m not too confident about that. I would rather see Highlander Warrior return to the roots of Control Warrior with a mix of removal and some major late-game threats. Scholomance Academy delivers on this aspect, and Warrior’s late-game threat package looks stronger than ever before:

Warrior has typically been the most reliable class to play control with, and with Bomb Warrior and Highlander Warrior as the main candidates, Scholomance Academy is likely to see yet another Control Warrior deck succeed.

Galakrond Priest has been the most played control deck in Ashes of Outland, and there is no reason to expect a major change in Priest’s fortunes when it comes to control gameplay. Sure, Tempo Priest is getting a bunch of tools, so we may get to see Priest decks with an actual win condition for a change, but Priest is also getting some major improvements to its annoyance toolkit.

Therefore, I am proud (?) to present my theorycraft of Scholomance Academy Thief Priest! Note that Thoughtsteal is for wimps, real Thief Priests do not copy, they take! If this works, it will be the most annoying Priest deck to play against ever. 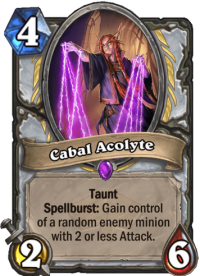 I am very afraid of what will happen if this archetype can be fine-tuned and works flawlessly. On the other hand, there are some strong-looking aggro decks coming in Scholomance Academy, and something like Control Warrior may be better prepared to handle them than Priest.

While the main Warlock deck during Ashes of Outland has been Quest Warlock with Malygos, it has also been possible to play a more control-oriented variant built around Kanrethad Ebonlocke. Scholomance Academy brings some interesting new tools for this Big Demons approach, and it may find more success if there are not too many one-turn-kill decks in the meta.

When building a deck around Kanrethad Ebonlocke, you want to avoid small Demons. Preferably, the deck is big Demons and a way to copy Kanrethad in order to play multiple Kanrethad Primes during the game. In Ashes of Outland, I have done this with Sathrovarr, which can be played on the same turn with Kanrethad Ebonlocke to get a total of four copies of the card, or just used to copy any surviving big minion on the board in matchups where all that value is not needed. 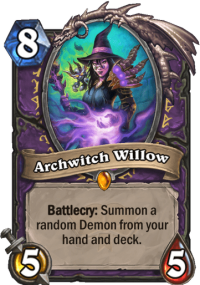 Scholomance Academy brings an alternative way to build the deck. Archwitch Willow can summon two big Demons instantly, one from the deck and one from your hand, and this board swing may already be enough to stabilize your position. Sathrovarr cannot be used with Archwitch, because it may end up being summoned by her, but Kanrethad Ebonlocke can still work, because he is not a Demon, only the Prime is. So, if you don’t play Kanrethad until after the Archwitch, the Prime is safe. Later in the game, the Prime can be copied with Felosophy for additional value.

This kind of Control Warlock will be happy to use the new Soul Fragment mechanic for healing and for some big Demons: Void Drinker on turn five followed by Abyssal Summoner on turn six can bring some big Taunt stats on the board early in the game.

The Dragon package seems too good to not run with Nether Breath and Crazed Netherwing being such powerful cards. The main question is how to activate those Dragon synergies reliably. In Ashes, I have used Evasive Drakonid and Dragonqueen Alexstrasza, but I’m contemplating giving Crimson Hothead a try in Scholomance Academy because I expect to be hit in the face a lot and some additional Taunt minions could help with that.

The Plot Twist package also seems indispensable with more draw giving more healing from Soul Fragments and Aranasi Broodmothers and Keli'dan the Breaker giving potential board clears more reliably when combined with Plot Twist. Once you go in that direction, it seems wasteful not to include Supreme Archaeology in the mix.

In Ashes of Outland, Quest Warlock with Malygos has been the superior approach. Control Warlock has had one major advantage, and that is the Warrior matchup, where Control Warlock does fine while Malygos Warlock struggles. In just about every other matchup, Malygos Warlock has been the better deck. We’ll see what happens in the Scholomance Academy meta.

The developers have repeatedly talked about how they want to enable Demon Hunter to branch out to other archetypes besides aggro, and I am willing to give it a try.

The Control Demon Hunter in Ashes of Outland attempted to control the board and finish the game with Warglaives of Azzinoth and Metamorphosis. With both cards nerfed, the archetype became slower and slower and with a lot of weapon synergies coming in Scholomance Academy, I expect weapon removal to be very common as well.

However, there is another way. Soul Fragments are a perfect fit for Control Demon Hunter for additional healing. The synergy cards also fit a control deck well as Soul Shear provides early single-target removal and Shardshatter Mystic provides area-of-effect damage. 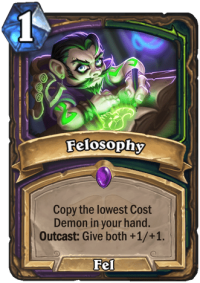 From this early package, the deck needs to proceed to some actual win conditions, and there are a couple of non-weapon solutions available. First, Magtheridon and Felosophy mean that Demon Hunter can have up to three Magtheridons in a single game. Demon Hunter also has plenty of removal tools that kill the Warders immediately, resulting in repeated board clears that are always followed by a 12/12 on the board. Second, Soulciologist Malicia and Cycle of Hatred can provide some wide boards for the Demon Hunter, and Cycle of Hatred can be combined with Bloodmage Thalnos or Mo'arg Artificer for a major board clear and swing turn.

Whether Mo'arg Artificer and Magtheridon fit in the same deck – the Artificer can block your Felosophy – needs some testing, but I am hopeful and see a lot of potential fun in an army of 12/12 Demons.

I am carefully optimistic about control decks in Scholomance Academy. There are some really strong-looking aggro decks taking shape with Aggro Rogue, Spell Shaman, and Tempo Demon Hunter, and if those aggro decks are able to punish the Ashes of Outland style swing turn decks enough, that can open up space for traditional control decks that have the tools to defend against aggro.

I hope the four ideas above can also help you to build your own control decks on the first day of the new expansion!