There is a dangerous new card in Murder at Castle Nathria. Ashes of Outland was merely a setback! Kael'thas Sinstrider has returned!

Kael'thas Sinstrider makes every third minion you play each turn cost 0. This effect counts minions that you play before Kael’thas and Kael’thas itself, so it can be used for all kinds of combos. This can be dangerous, as the previous iteration of Kael’thas showed us. 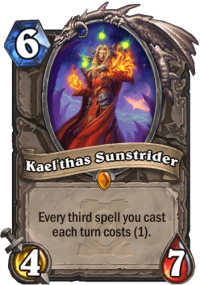 The first iteration of Kael’thas in Hearthstone, Kael'thas Sunstrider, makes every third spell you cast each turn cost 1. Kael’thas is one of the most changed cards in the history of Hearthstone.

As time went on and the power level of Hearthstone kept rising, Blizzard thought that maybe Kael’thas would no longer break the game. In April 2022, Kael'thas Sunstrider was fully un-nerfed – its cost was changed back to 6 mana, and the effect back to making spells cost 0. Alas, this turned out to be a bad move and Kael’thas was re-nerfed mere three weeks later. It kept its original cost at 6 mana, but the effect makes spells cost 1 again instead of 0.

Zero-cost spells enabled crazy combos ranging from deadly to whimsical. The deadly combos were especially in Druid decks, where Innervate and Lightning Bloom could result in an early Kael’thas, followed by a free Ultimate Infestation and whatever finishers you like ranging from direct damage to drawing your entire deck and using Togwaggle to building a giant board with Survival of the Fittest. An example of a whimsical combo was Priest Mass Resurrection of Kael'thas Sunstrider, Prophet Velen, and Malygos, and then shooting the opponent with whatever you had, like Holy Nova and Holy Fire, powered by some zero-cost spells.

The change from zero-cost spells to one-cost spells removed most of the combos you could pull off with Kael’thas and the card does not currently see mainstream play in Wild.

Kael’thas was either crazy good or almost unplayable. Blizzard tried to change it multiple times, but it kept shifting between these two extremes. 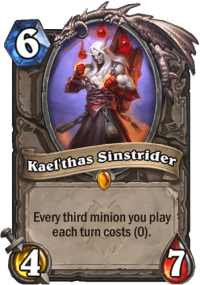 Kael'thas Sinstrider once again makes cards cost zero. Cards that cost zero can be very strong and dangerous. Who could have guessed?

However, there are some key differences between the new Kael’thas and the old Kael’thas. Most importantly, cards that temporarily give you mana could be used to play the old Kael'thas Sunstrider and at the same time advance the effect counter. Use two copies of Innervate to get Kael'thas Sunstrider out, and you can immediately cast a spell for free. You cannot gain mana with minions in the same way.

So, maybe the new Kael'thas Sinstrider cannot break the game. Or can it? 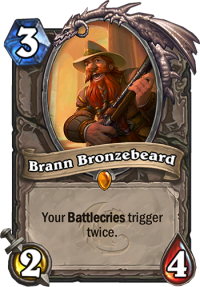 In the theorycrafting live streams, Kael'thas Sinstrider was busy working with Brann Bronzebeard. This is the most obvious Kael’thas combo available. Kael’thas and Brann cost a total of nine mana, and then you can throw in any Battlecry minion for free and for double the effect.

The most scary-looking combo was no doubt Druid using tons of tokens followed up by Kael'thas Sinstrider + Brann Bronzebeard + Sire Denathrius. That is just pure pain. Or awesome. Depends on your perspective.

This is the Ramp Druid deck Nohandsgamer used in the theorycrafting event that includes that Brann and Denathrius combo as a finisher:

Druid can of course pull off Brann Bronzebeard + Sire Denathrius even without Kael'thas Sinstrider. There’s something about having more than ten mana available that makes crazy things possible. However, Kael’thas opens up Brann combos to every class, as both Kael’thas and Brann are Neutral.

Mage can use Kael'thas Sinstrider + Brann Bronzebeard + either Kel'Thuzad, the Inevitable or Mordresh Fire Eye. I suppose the Volatile Skeletons could even synergize with Sire Denathrius if you want two payoff cards without including Mordresh. The problem with Denathrius in Mage is that tutoring for it can be difficult. Taelan Fordring is available for all classes, but Druid enjoys a special relationship with Denathrius thanks to Capture Coldtooth Mine being able to increase the consistency of getting Denathrius a lot.

This is what a Volatile Mage deck with the Kael’thas finisher could look like:

Demon Hunter also has a big Battlecry payoff card in Jace Darkweaver, but spending two slots of that deck to include Kael’thas and Brann seems unlikely. Fel Demon Hunter is an aggressive deck that typically cannot afford to hold back cards. That is not to say that a new, slower style could not happen, as Demon Hunter is a class with tons of card draw, so a more combo-like finisher can definitely work for the class. It would probably have to be focused around Jace, as the other main alternative for Demon Hunter is Artificer Xy'mox, and Xymox does not really end the game: in the best-case scenario, it deals damage to two minions, draws and discounts two cards, and summons two minions. Double that with Brann and you get a really impressive effect, but still nothing immediately game-winning.

You might even consider combining Kael’thas with Final Showdown for that real combo deck feel. Demon Hunter has done that before. The big difference is that Glide enabled you to throw cards back into your deck to draw them again for cheaper. Bibliomite just does not have that same power.

Neutral Brann and Kael’thas combos available to all classes include Mutanus the Devourer eating two minions from hand and Alexstrasza the Life-Binder dealing 16 damage to the face.

Druid is the most flexible class for using Kael'thas Sinstrider. You could also combine Kael’thas with Sesselie of the Fae Court and maybe even Oracle of Elune. Zero-cost minions and copies of the minions you play mean that you can fill your board real fast. It’s too bad there are only seven slots on the board, as a Deathrattle Druid with Kael’thas probably cannot get to its full power with such limited space. Perhaps the Oracle is just too much. Superior David played with this Deathrattle Druid in the theorycrafting event without the Oracles:

Shaman also has a lot of potential with Kael’thas. Between Clownfish and Schooling that can generate cheap minions and Bolner Hammerbeak that can repeat Battlecry effects, Shaman is just waiting for the right combination to be found or Blizzard to lose attention for a moment and create the right card.

Kael'thas Sinstrider can provide Shaman with a big swing turn with Mutanus the Devourer or with Snowfall Guardian, in addition to the more predictable Sire Denathrius plays. How about Kael'thas Sinstrider + a zero-cost Murloc or a zero-cost Gigantotem + Snowfall Guardian on turn six, followed up by another freeze on turn seven, and a Bloodlust lethal on turn eight? Shaman can do similar things already now, but Kael’thas gives Shaman even more options to pull them off. There are so many synergies for Kael’thas in Shaman that it is likely to see play in the class as you will often find some way to use it.

In this example, Kael’thas can be used to cheat out Snowfall Guardian, Glugg the Gulper, Mutanus the Devourer, or Alexstrasza the Life-Binder with other minions at the same time:

Warrior can combine Kael’thas with To the Front! to pull off some multi-minion combos. Then again, what is the role of Kael’thas compared to just using To the Front! alone? There does not seem to be a great combo with the cards in the current Standard format, but maybe in the future.

Any minions that can be discounted to zero are promising Kael’thas combo pieces. For best effect, they’d need to be discounted by turn six so that you can play Kael’thas on curve, but for the most part that is not possible. Gigantotem and Naga Giant can be great building blocks for an overwhelming board with Kael’thas.

It is unlikely for Kael'thas Sinstrider to break the game in the same way Kael'thas Sunstrider did. There just are not enough good zero-cost minions to make such crazy things happen. That is not to say that the new Kael’thas is not a strong card. It looks like a killer card in specific decks, especially when combined with Brann Bronzebeard and optionally Sire Denathrius. Many games of Hearthstone will end with those cards in the next months.