Traditionally, the Discard mechanic was never seen as a viable tool for Warlock (with the exception of the Karazhan aggro-discard deck). The mechanic’s downside was often too much to overcome, since its randomness could completely backfire and leave you with no late-game threats to compete. Karazhan introduced some cards that benefited from the mechanic, such as Malchezaar's Imp and Silverware Golem, making an aggro version of the deck work for quite a while, but after those cards left standard it was back to the same old obscurity for the mechanic.

All that may change with the new expansion, though, with some of the new cards, namely Shriek and Reckless Diretroll, having a restriction for their discard: you discard your lowest-cost card, instead of a random one! This makes it a lot more controllable, while helping you maintain your deck’s late-game intact. Moreover, the new legendary, High Priestess Jeklik, duplicates itself if discarded, making itself and Clutchmother Zavas the two best targets for a discard. Hitting High Priestess Jeklik with a discard one time, immediately gives you more targets than benefit from one, so you could potentially end up with a hand full of copies of the card.

With Discard making a comeback, Lakkari Sacrifice could not be missing from the discussion. It is a pretty powerful card in slow matchups and Cataclysm acts as a fail-safe, so you can complete the quest in one go, while the new epic card, Soulwarden, can return some of the lost value back to your hand.

Most of the previous versions of a Discard-themed deck were a mix between aggro and mid-range,  focused on using the mechanic’s cards as a tempo gain, either to remove a threat while developing a board with Soulfire, or dropping a big minion early in the game with Doomguard. The deck used as little of the mechanic as possible, usually only including those two cards in the list, but with little success.

All that changed during the Karazhan meta, with the introduction of two discard-friendly cards; Malchezaar's Imp let you, every time you discarded cards, draw the same number of them from your deck, while Silverware Golem would be summoned to the board for free when discarded. Those two, along with Darkshire Librarian from the Whispers of the Old Gods set, gave the deck enough consistency to work as an aggressive deck and terrorize the ladder with really powerful-swing turns during the early game, mainly thanks to free Silverware Golems from Soulfire, Darkshire Librarian, Doomguard discards.

Into the Year of the Mammoth

With the change to the Year of the Mammoth the deck did not lose much, although it did lose Dark Peddler and, more importantly, Power Overwhelming. Aggressive lists were utilizing the upside of Malchezaar's Imp and Silverware Golem, up until the release of the first expansion of the Standard cycle, when Quests would be introduced.

Un’Goro and the Quest Deck

The release of the Un’Goro set brought forth the Quest card Lakkari Sacrifice, which rewarded the player for discarding 6 total cards during the course of the game with Nether Portal; a pretty powerful anti-control card that would require constant attention from the opponent, becoming a sinkhole for their resources. The set also introduced a new, discard-friendly card, Clutchmother Zavas, providing a steady target for discards, especially for low-sized hands. Some lists did try and make the quest work, even aggressive ones, using Nether Portal to refill the board after dumping the hand during the early game, but skipping turn 1 was too much of a tradeoff, so the quest was eventually dropped.

Lakkari Sacrifice‘s best use was in slower decks, where you could take more calculated risks with your discards, using the Nether Portal as a value-generator. This left the deck with more freedom to include big finishers and removals and not focus on early game aggression as much. Even though the deck was more consistent than slow discard-themed decks of the past, it still performed relatively bad, mainly due to the downside of losing important cards from your hand that could matter down the road, such as AoE, removals or big finishers, like Lord Jaraxxus.

The introduction of Cataclysm with the Kobolds and Catabombs set gave the Quest desk a fool-proof way to complete the quest on turn 4, casting it on the following turn. This also let the deck open up 4 spots, since it did not need Soulfire or Doomguard to complete the quest, although some lists still included Soulfire and Lakkari Felhound. The deck relied heavily on removal and late-game, using Nether Portal‘s imps as disposable threats that could soak up the opponent’s resources, letting the heavier side of the deck to go unanswered.

The introduction of Lesser Amethyst Spellstone meant that slower warlock decks now had access to powerful healing, which let you hero power during the first couple of turns so you can cast a turn-4 Cataclysm pretty consistently. Still, the price of discarding the entirety of your hand was too much of a tradeoff, leaving you really vulnerable to aggression, while also limiting your answers versus control decks, which ultimately left the deck pretty weak and out of the competitive scene. 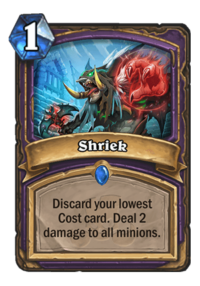 Shriek: A 1-cost half-Defile, this is clearly a control addition, since it damages ALL minions on the board. The 2 damage is, more often than not, enough during the first few turns against aggressive decks. The card’s versatility is really high, letting you develop a board after casting it with relative ease. The discard’s restriction if where the main source of power of the card lies, letting you (somewhat) control what you discard from your hand. The card can also be used in conjuction with the deck’s other AoE spells, Defile and Hellfire, to deal with bigger boards ormanipulate the health of the minions on the board for a good Defile.

Reckless Diretroll: A powerful 3-drop taunt minion, this is another great tool against aggressive lists. 6 health is difficult to deal with that early on, so drop in onto the board and let it soak up your opponent’s pressure, while you look for your spells other anti-aggro answers. As with Shriek, the restriction for the discard is what makes the card so desirable for a Lakkari Sacrifice deck. Being able to control, to an extent, what you discard can be pretty powerful, especially if you can hit the two discard-benefitting cards Clutchmother Zavas or High Priestess Jeklik. 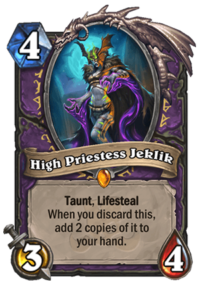 High Priestess Jeklik: A similar theme to Clutchmother Zavas from the Un’Goro set, this 4-drop legendary minion’s 3/4 stats for 4 mana may seem really lackluster, but its effect can be pretty game-changing. Even getting hit with a discard just 1 time can immediately provide you with a great amount of value. Keep in mind that having any number of copies of this card in your hand while casting Cataclysm will return the same number x2 to your hand, so use it to complete your Lakkari Sacrifice, while maintaining a respectable hand size.

Soulwarden: Although a 6/6 for 6 is nothing special, or even lackluster, this card’s effect is just out of this world; returning 3 discarded cards to your hand can create a lot of card advantage in slower matchups, which also means that you can be a little less careful with your discards during the earlier turns, as you can eventually get them back before you even need them. Discarding multiple copies of High Priestess Jeklik can return multiple copies of them to your hand, which could either be good or bad, but worth keeping in mind anyway. Another thing to note is that, contrary to the interaction between High Priestess Jeklik and Cataclysm, when returned to the hand High Priestess Jeklik does not keep any buffs, but rather returns to the hand as a 3/4.

With all the cards from the new expansion revealed, two of them stand out for this archtype; High Priestess Jeklik can immediately make the discard from a downside to an upside by not only returning to the hand, but also providing another copy of itself, essentially giving you more reason to use a discard-related card. The second one is Soulwarden, whose effect is really powerful in slow matchups. Returning 3 discarded cards to your hand is nothing to laugh at, because when combined, the two copies return all the cost for Lakkari Sacrifice‘s completion back to your hand, negating the cost altogether.

But after those two cards there are another two that are going to be pretty important for the deck; Shriek and Reckless Diretroll. Shriek is a really good AoE against aggressive decks, especially ones that rely mainly on low-cost minions as their win condition, and with the cost being only 1 mana, it can be pretty versatily and be used as a tempo removal pretty early on. Reckless Diretroll, on the other hand, is a powerful 3-drop, that can delay the aggressive decks, while being annoying to remove for slower ones. Both cards require a discard, along with the mana cost, but what stands out is that they discard the lowest-cost card from your hand. That restriction is pretty important, since the deck can include Clutchmother Zavas at 2-mana and the new legendary, High Priestess Jeklik, at 4, as discard targets. The restriction also makes it kind of annoying to include the cards in aggressive lists, since Shriek damages ALL minions and Reckless Diretroll’s 2 attack is rather weak for a 3-drop.

With the new discard cards having the lowest-cost restriction, the mechanic is a lot more forgiving for a control deck. Shriek is a great addition to the arsenal of the class, letting you hold onto your Defiles for the later stages of the game. Clutchmother Zavas and High Priestess Jeklik can turn the mechanic’s downside into an advantage immediately, which only helps the deck be conservative with its resources. Cataclysm is a great fail-safe for the completion of the Quest and Nether Portal is half a win against slow decks.

The new restriction for the discard mechanic on the new cards may make the deck more consistent than ever, which will also showcase the power it can hold. Gearing the cards heavily towards the contol side is, also, important, because of how powerful such tempo can be at the hands of aggro, as evidenced with the Aggressive Discard Warlock decks during the Karazhan meta. Taking calculated risks and reaping the benefits will be a lot of fun, while also keeping fatigue decks in check.