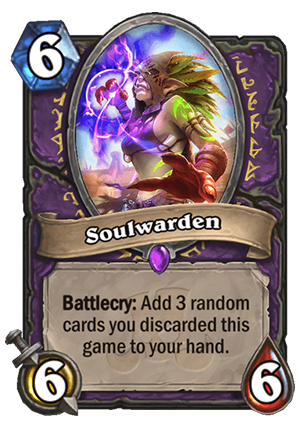 Battlecry: Add 3 random cards you discarded this game to your hand.

Ummm… Isn’t this card just absolutely amazing in any deck that runs Discard effects? Even in Zoo? 6 mana for a 6/6 body is decent, just below the vanilla stats. But you also get to draw up to 3 cards. Or rather, put them into your hand – which is better than drawing most of the time, since it doesn’t bring you closer to fatigue.

In a faster deck like Zoo, this is an amazing refill. You can now drop your Doomguards and Soulfires much more freely without worrying about running out of steam, because you will just get everything back with this card. It also makes The Soularium better, since even if you draw two cards you can’t play, you might still get them back with this, and a bunch of higher mana cost cards will definitely be relevant later in the game. It’s also a solid threat by itself, something that can’t be ignored. My only worry right now is that it’s most likely too slow for the current Heal Zoo iteration – it would fit into a slightly slower, more Midrange variant much better.

In a slower deck, it lets you run some Discard cards without actually worrying that you will get rid of one of your win conditions. Even if you drop it, you can just get it back with it for basically no tempo loss. And funny thing is that you can get infinite value if you discard one Soulwarden and then play the second one. You get it back, and can play a 6/6 every turn without running out of resources (and if you’ve discarded 1-2 other cards, you also get them back).

So it’s just… great card all around. But funny thing is that it might not see play at all. It’s completely reliant on how well the Discard mechanic will turn out to be. If no Discard cards are played, it’s absolutely useless, as it won’t draw you anything. Similarly, if Zoo won’t drop a super aggressive play style it has right now for the sake of something a little slower, I don’t think that it will want to play a 6 mana card like that, even if it refills hand. Funny thing about cards that require synergy to work – even if they’re some of the most amazing cards, but the decks that want to run them are bad / don’t work, they can not see play at all. I honestly think that it won’t happen to this card, but it’s definitely a possibility.

Card rating: 9/10 in Discard decks… but will those decks work? Can’t say yet.