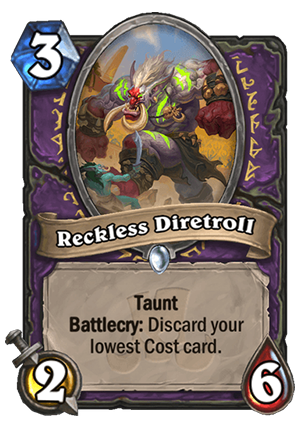 3 mana for a 2/6 Taunt is obviously nice… but is it actually worth a discard? I honestly wouldn’t say so. It’s not on a Doomguard power level, for example. On the other hand, the “targeted” discard is a nice bonus – it’s always better to know what you will get rid of than having to rely on the RNG.

You see, discarding Coin is often seen as one of the best outcomes, because it’s not really worth a card most of the time (in Warlock, that is). But if you discard Coin with it, it’s basically as if you’ve paid 4 mana for it. 4 mana for a 2/6 Taunt… doesn’t it sound familiar? (Stegodon)

I have to say that it’s probably better than Lakkari Felhound if we talk about bigger Taunts that Discard, but given that Lakkari hasn’t seen any competitive play, it’s not exactly the greatest comparison.

But like I’ve said, I don’t think that it’s worth the discard, especially in a world where Tar Creeper exists. If anything, you might want to play this in a deck that WANTS to discard stuff – either a Quest Warlock (which I still don’t believe will work, because it doesn’t suffer from lack of ways to trigger the quest, it’s just too slow and clunky in general) or a regular Discard deck, running Discard-matter cards, such as Clutchmother Zavas or the new High Priestess Jeklik.

When it comes to targeted discards, I actually think that Shriek can see more play, because it makes sense in non-Discard decks like Control Warlock. This card doesn’t, so it completely relies on a full-blown Discard deck to work in order to see play.