Warlocks are magic users specializing in Shadow and Fire spells. Warlocks are what could be considered the “evil” spell caster of the Warcraft world. They can draw power straight from the souls of their opponents. Their offensive magic divides into two main paths – Affliction, which based around curses and spells that put the enemy into a slow agony and Destruction, which revolves around powerful, direct damage spells.

But probably the most iconic magic Warlocks might use is Demonology. It’s used to summon powerful demons and bind them to the Warlock’s command. They can summon a variety of demonic entities – Imp, Succubus, Voidwalker, Felhunter, and Felguard. Each one of them has different strengths and weaknesses, so only Warlock masters will know how to properly use them. On top of that, Warlocks can summon more powerful demons for shorter periods of time if the situation is really dire – an Infernal that deals massive area damage and a Doomguard, which excels at the single target combat. 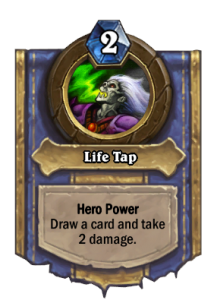 Warlock’s Hero Power is Life Tap. After using it, the Warlock takes 2 damage and draws a card. Depending on the matchup, it might be the strongest Hero Power in the entire game though new players tend to dismiss it very easily. After all, dealing damage to oneself is not something you normally want to do. But that’s one of the ongoing themes in Warlock – they sacrifice health in order to gain other advantages. In this case, card advantage. There are matchups where your health total doesn’t matter and when playing against such decks (like Control Priest or Control Paladin), Life Tap is simply a free source of card draw. Since Warlocks have built-in card draw, they also don’t have to worry about playing more cards that draw and can focus on the actual theme of their deck more.

The most iconic Warlock’s mechanic is sacrificing one resource in order to gain other advantages. A lot of the Warlock cards have higher stats or more powerful effects but also come with a natural disadvantage. Sacrificing your own health is most common – Life Tap already does that. But there are many more cards that sacrifice health to gain something else. Bloodbloom and Cho'Gall trade health for mana, Flame Imp, Wrathguard and Pit Lord trade health for minion stats, while Chittering Tunneler trades health for card advantage (similarly to the Hero Power). Other resources Warlocks can trade is mana, although this one is far more questionable. Destroying a mana crystal needs to come with a great advantage to even be considered. That’s why Blastcrystal Potion has seen quite a lot of play (because destroying a minion is a very powerful effect in a class with weak single target removal), but neither Felguard, nor Demonfuse (destroying own mana is very similar to giving the enemy more) were ever played. Warlocks can even sacrifice their own minions to gain some advantages (Power Overwhelming, Void Terror, Shadowflame, Unwilling Sacrifice, Ravenous Pterrordax).

Kobolds & Catacombs expansion have taken the self-damage theme even further, introducing more ways to do so (Kobold Librarian, Vulgar Homunculus) as well as a card that benefits from you doing exactly that – Lesser Amethyst Spellstone. Upgrading it to third level gives you an insane 7 damage + 7 healing for just 4 mana,.

On top of all of those, another way Warlock can gain some sort of advantage over the opponent is the Discard mechanic. While it’s not entirely tied to the Warlock class (Deathwing and Astral Communion are other cards that feature the discard mechanic), it’s the only class that can actually utilize it. Not only are the Warlock Discard cards are powerful (Soulfire, Doomguard, Darkshire Librarian, Lakkari Felhound), but the class has some countermeasures against the negative effect. Malchezaar's Imp lets Warlock draw for every card it discards, while Silverware Golem, Fist of Jaraxxus and Clutchmother Zavas are great discard targets because discarding them results in a positive outcome. Even the Warlock’s Un’Goro Quest – Lakkari Sacrifice – is based around Discards. However, discarding six cards is a rather big requirement given that the Discard decks are built around tempo and it’s pretty slow.

There are also some ongoing themes when it comes to the Warlock cards. When new cards are released, there is a significant chance that some of them will fall into one of those categories:

Here are the Warlock decks you can use on the ladder in the current meta. While not every deck listed here is high tier, they all should be viable options, especially to climb through the lower ranks.

Zoo has been one of the oldest established archetypes in Hearthstone. The core strategy behind it never really changed, and it doesn’t change with the new expansion. The strength of Zoolock lies in flooding the deck with cheap and high-value minions, combined with clever mana usage and aggressive use of Life Tap, the Warlock’s Hero Power.

During Knights of the Frozen Throne, Zoo Warlock has jumped onto the Prince Keleseth bandwagon. Given that the deck didn’t really have strong 2 mana cards, it could quite easily opt to not run any of them whatsoever and instead hope to get an early Keleseth in order to improve the deck’s power (and it did indeed improve a lot – not only it did make the deck’s mid game much better, but your late game turns were much more relevant).

However, Kobolds & Catacombs have introduced a very powerful 2-drop – Vulgar Homunculus – which made Zoo players re-think the Keleseth strategy. Right now, it appears that both strategies are viable, with people mostly leaning towards the non-Keleseth version. Deck featuring Prince can possibly be better, but it’s also less consistent. If you get it on Turn 2, it will always outperform the non-Keleseth version, but if you don’t, it can fall behind a bit.

Saying that Warlock has been the burnt child of Knights of the Frozen Throne would be an understatement. The class that always had a decent standing throughout the earlier expansions of Hearthstone took a huge hit. The not so recent introduction of the Jade mechanic is only one reason; the uprising of control killers like Big Priest or Exodia Mage kept the former king of control archetypes in check.

But just after two weeks of the new expansion “Kobolds and Catacombs”, we can already see the end of that period of drought for Warlock. The class received numerous unique minions and spells that enable both aggressive and control archetypes to reign surpreme again.

The archetype of Cube Warlock looks particularly unique, and after a first few impressions during high-competitive play at various tournaments, this list that revolves around the new minion Carnivorous Cube looks to take a spot in the highest echelons of tier lists.

As already said, this deck surely plays out in a very unique way. The complexity of the list’s win conditions is only surpassed by the number of possible plays in the later stages of the game.

The general theme of the deck however looks pretty simple: It tries to control the board while establishing terrifying combinations of minions to either kill you within a couple of turns or to block minion damage for multiple eternities.

If you’re a new player without a big collection, you might be looking for a way to play Warlock without spending a lot of your Dust on the Legendaries.

This deck is a Basic Midrange Warlock. Sadly for the new players that want to pick up the class, Warlock basic cards are all over the place. We get the base of few different strategies, but none of them is developed more and to make a really working Warlock deck, a lot of non-Basic cards are necessary.

The deck mostly relies on the Neutral minions core, supported by the Basic Warlock removals. While not the best, we have a different single target (Mortal Coil, Shadow Bolt) and AoE (Hellfire, Dread Infernal) removals. Dread Infernal is probably the strongest card, as it has pretty solid base stats, and the AoE effect can be deadly if used correctly.

One of the main reason to run Warlock over other classes is the Hero Power. The class can refill its hand much easier than the other classes, but at the cost of health. Warlock’s Hero Power might be the most difficult one to use for the new players, so if you’re just starting your adventure with Hearthstone, I’d recommend picking a different deck instead.

Zoo Warlock is a very old Warlock archetype. It was first popularized by Reynad back in the Classic Hearthstone, then it was going in and out of the meta multiple times. About a year ago, after One Night in Karazhan adventure, Zoo has raised again with a new version full of discard synergies. However, it as quickly fallen out of favor again, and we haven’t seen almost any Zoo Warlocks ever since then.

Introduction of Prince Keleseth made it powerful again in the Knights of the Frozen Throne. However, given that Keleseth is a Legendary, that option wasn’t possible for many of the budget players. Luckily for them, things have changed in Kobolds & Catacombs. Now the non-Keleseth version of Zoo is pretty much as viable as the Prince version, making it easier to build the deck on budget.

While it’s not the best deck ever and it would still require some Epics, Legendaries and adventure cards to be optimized, it’s actually not half bad. It might be one of the best budget decks available right now, with Rank 5 being easily attainable, while the more patient players might even hit Legend (especially after some upgrades).

Every 2 levels, up to level 10, you will get two copies of a Basic class card. A lot of those cards are staples, so it’s heavily advised to highly prioritize getting every class to level 10.