Zoolock may be the best deck for new players to learn. The low crafting cost has made it accessible to nearly all players since the early days of Hearthstone. More importantly, the deck teaches efficient trading and proper minion placement; two factors critical to success in the game. 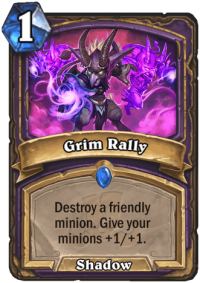 The speed of past metagames has kept Zoo Warlock under control for a while, but there was a time when it was a powerhouse in Hearthstone. Even at its lowest points, Zoo Warlock has had some degree of success. More recently, a metagame centered around minion-based combat, a facet of Hearthstone that few decks do better than Zoo, has come back into vogue, giving the once forgotten deck an opening.

At the end of The Witchwood metagame, Zoo Warlock returned to fame as one of the strongest decks in Standard. The resurgence was, in large part, thanks to the discovery of the healing package that allowed Zoo to buff Lightwarden and play Happy Ghoul for free.

With the release of The Boomsday Project, Zoo gained powerful new tools, many of which are budget-friendly. Doubling Imp joins the usual assortment of Demons in Zoo Warlock. Doubling Imp not only pairs well with the Analyst but also with the new inclusion Soul Infusion, if you can manipulate your hand to guarantee the buff. Even without a buff, this new Imp spreads wide and drops eight stats on board, perfect for setting up a Fungalmancer in the midgame.

In Rastakhan’s Rumble, Zoo Warlock again received new toys to bolster this already powerful budget deck. Grim Rally allows you to buff up your entire board so long as you’re willing to part with one of your minions. Fortunately, Scarab Egg complements this card perfectly. Not only does the egg provide an optimal sacrifice target, but it also summons several token minions to accept the buff from the new Spell.

As any Hearthstone veteran will tell you, piloting Zoo Warlock is about one thing: board control. With a favorable position on board, Zoo Warlock can quickly snowball into an easy victory. Should it get behind, however, it struggles to regain its footing.

This new version of Zoo Warlock, potent healing synergies, offers the potential for ridiculous openers that make the deck more aggressive than some past iterations of Zoo. In certain matchups, these explosive starts can score a quick kill against unsuspecting opponents. Other times, dumping minions into play will give you a board lead that few opponents can recover from.

Early turns are typically spent making value trades to preserve a board lead. Fortunately, Zoo Warlock has numerous overstatted minions that can be difficult to remove and frequently trade two-for-one. Going into the mid-game, potent buffs can be utilized to solidify your board state and continue applying pressure.

Grim Rally can really help cement an early advantage by adding stats to a wide board. Even if you don’t have a Scarab Egg to sacrifice, you can make attacks (including value trades) with a minion before destroying it to buff up the rest of your board. Several minions in this deck go wide on the board, creating the perfect targets for your Grim Rally turns.

In the late game, Doomguard can provide some of the deck’s limited swing potential or close out the game with a lethal burst, especially when Soul Infusion is used at the right time. Likewise, Fungalmancer can leverage your board position into favorable trades or extra burst damage.

A longtime favorite for budget-minded players, few sacrifices are necessary to build a solid Zoo Warlock list. Zoo has historically made good use of Commons, Rares, and Basic cards. Aside from the two Legendary cards mentioned below (both of which are optional), the deck is complete as is.

Should you opt for a Keleseth build, look to replace your Scarab Eggs with minions that spread wide, receive the buff well, or have healing effects. Along with Prince Keleseth, a single Tar Creeper or Lifedrinker fit this deck nicely in place of the 2-mana minions.

Similarly, some Zoo enthusiasts have been adding Leeroy Jenkins over Doomguards lately, but the verdict is still out on which is superior. If you’re lacking this Classic Legendary minion, you needn’t be in a rush to craft him for this deck. If you already have a copy of this iconic Charger, he’s worth considering.

Here’s a list of cards you can add to this deck if you happen to have them or are missing anything in the decklist.